Familiar / Unfamiliar name to the breakers

A once frequent caller in Halifax has been sold to the breakers at the age of 13 years. Surely a very young age for a ship, but another victim of the neo-panamax crunch.

Built in 2004 by Hyundai, Ulsan, Zim Shenzhen was a 53,453 grt container ship of 54,644 dwt. With a capacity of 4814 TEU (including 330 reefers), the 965 foot long ship was built to suit the old Panama Canal maximum size. Rendered obsolete by new larger locks, despite its relatively young age, it could no longer compete with larger ships that could cargo more cheaply on a per box basis. 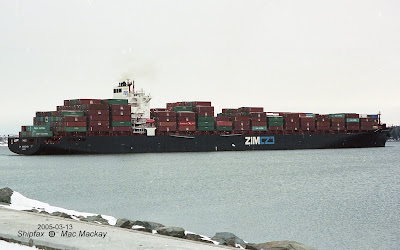 ZIM Shenzhen made its first call in Halifax July 4, 2004. It was not until March of 2005 that I was able to catch it sailing from Halterm.

Owned by Zodiac Maritime of London, it was built for charter to ZIM, but that arrangement ended in 2014 and new work was found for it as OOCL Halifax, but that was short term and the ship was laid up in May 2016 with its name shortened to Halifax. (It did not visit its namesake port under either of those names.)

Zodiac Maritime was recipient of the "worst corporate dumper prize" of 2016 by the NGO Shipbreaking Platform for sending 12 ships to Bangladesh for scrap in 2016 alone. There was one death of a worker on one of those ships while in the scrapper's yard. Bangladesh and Pakistan, followed closely by most of India, have the worst records for unsafe and polluting ship breaking. Some minor progress had been made in improving conditions, but with 668 ships broken up in those three countries alone last year, the pressure to take on more ships has been too much to cope with, and progress on safety has gone out the window.

Zodiac Maritime has been in the business of building ships to charter to shipping lines. They were financed at the time of high charter rates and before the new Panama Canal opened. When rates collapsed, charters were broken or not renewed, and Zodiac was left with unemployable ships, many of them old panamax size. A sister ship, Zim Pusan has been renamed Pusan and is also slated for breaking up.

Zodiac's owner is Eyal Ofer, son of the ZIM founder, and many of his ship were chartered to ZIM. His brother Idal Ofer, who controls Israel Corp, was the winner of the 2015 award for worst corporate dumper.

There is still a vast over supply of ships in the world, and with new ships coming on line all the time, the need to scrap ships is still there, and 2017 seems set to equal or exceed the record of 862 ships scrapped last year. Even that will not be enough to right the balance and it therefore seems equally likely that rates will remain low and we will continue to see  unsafe shipbreaking in southeast Asia and elsewhere.