Most auto carriers try to be in an out of Autoport during a normal eight hour shift. In past weeks some of those stays have extended to nearly two days. However this weekend's visitor must be setting a record.

Viking Adventure arrived Friday, February 24 and is not expected to sail until late Monday, February 27. There has been no sign that the ship is unloading yet, so it is no doubt waiting for the parking lots in Autoport to be cleared of previous arrivals. As mentioned in an earlier post, heavy snow and a continuous stream of ships has left Autoport in a backlog situation. Now that a lot of the snow has melted, and CN has been able to move larger train loads in and out there is some progress in making up the delays. 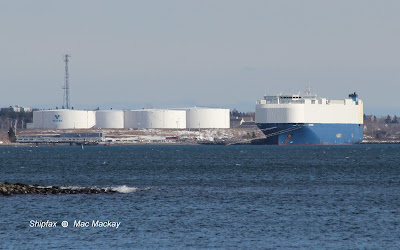 Viking Adventure towers over the land side installations of neighbouring Valero.

Viking Adventure is a very large Pure Car and Truck Carrier, with a capacity of 6500 automobiles. When it does start to unload, it will likely fill the near shore area of Autoport once again.

Built in 2015 by Jiangsu Jinling in Nanjing, China, the ship measures 62,106 grt and 18,372 dwt. It is one of four sister ships in the fleet of Gram Car Carriers. The company, now operating from Singapore, but owned in Oslo, specializes in forming and managing private equity syndicates to own ships and time charter them to the larger shipping companies. Its current fleet includes about 20 ships, some of the smaller feeder type (2,000 cars) and others in the world wide trade (4,200 and 6,400 size).

Ramp doiwn, but no action, Viking Adventure will begin to unload Monday morning.