A trip to the south shore of Nova Scotia turned up some items of interest.

At Brooklyn (Queen's County) on the eastern side of Liverpool Bay, the shipbreaking operation of R.J.MacIsaac is going full steam on demolition of the former HMCS Protecteur. 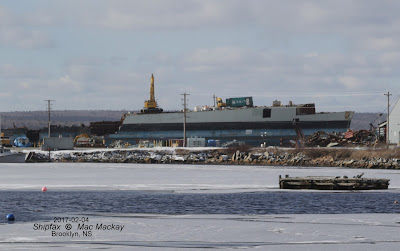 Crews have removed the entire superstructure, making it light enough to haul it at least partially up on to dry land. They are now gutting out the hull. It won't be long before there will be little left to see. 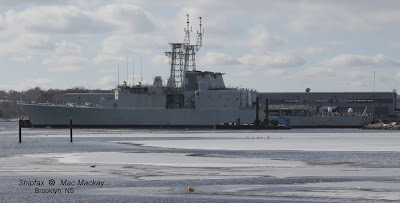 Meanwhile the two Tribal destroyers, former HMCS Iroquois and HMCS  Algonquin appear largely untouched - at least from the exterior. There is likely work going on inside stripping out wiring, plumbing and ductwork which has a relatively high value.

My post on January 30 showed the last Tribal in commission, HMCS Athabaskan. Not long after that post it was announced that the ship will be decommissioned March 10 following a sail past, complete with Sea King helicopter low altitude fly over.
Meanwhile Halifax Shipyard warns that there may be layoffs in 2019 after completion of the Arctic Offshore Patrol vessels and the start of the frigate replacement program. It is taking an inordinately long time to decide on a design and maintenance program for the ships. My prediction of when the RCN might have a destroyer with command capability to replace the Athabaskan may have been optimistic at ten to fifteen years.

Across Liverpool Bay, in Liverpool itself, it was a quiet day at the Mersey Seafoods Ltd wharf. The stern trawler Richmond Odyssey occupied its usual spot hard by the Bristol Avenue bridge. 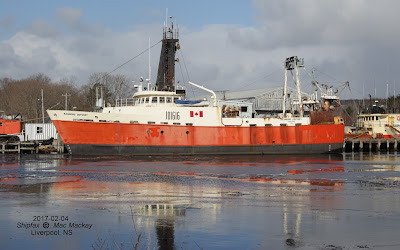 The vessel was built in 1989 by Ferguson Industries Ltd in Pictou, NS for Richmond Fisheries (1983) Ltd of Petit-de-Grat, NS, but was laid up with sister vessels in Liverpool for many years when the cod moratorium was enacted. Mersey Seafoods gave it a major refit in the early 2000s and put it back to work for other groundfish.
In looking back in my files I found a photo of the ship nearing completion at Pictou in May 1989.

Nearly ready to launch Richmond Odyssey sits on the stocks with the bug Newfoundland dragger Northern Ranger Osprey in the background.

At the same time the CCGS Tracy was undergoing a refit. Built in 1968 by Port Weller Dry Dock in St.Catharines, ON, the buoy tender was usually seen on the St.Lawrence Seaway, so was well out of its freshwater domain in Pictou. 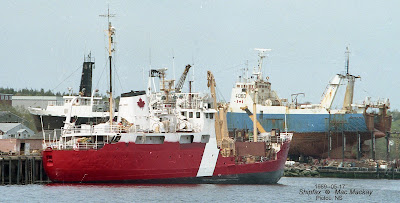 It was laid up in Prescott, ON in 2013 and has now been renamed 2016-03 and offered for sale by Crown Assets for a measly $250,000 minimum bid. Powered by a pair of 8 cylinder Fairbanks Morse 338 D8 -1/8 diesels driving two Canadian Westinghouse electric motors, it was a fine little ship in its time. It received a major rebuild in 2010, but this was not enough to extend its life very much. 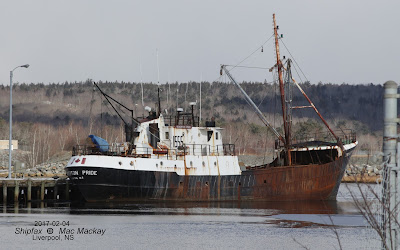 Also in Liverpool this morning, the veteran dragger Bickerton Pride holds down the end of the pier. Also a product of Ferguson's in Pictou, it dates from 1965. Built originally for the Port Bickerton Cooperative it has been part of the Mersey Seafoods fleet for many years. Last fitted for the scallop fishery, it appears to have come to end of its productive life and seems destined for the torch.