A casual ship watcher in Halifax today might think that every ship must have the prefix Atlantic in its name.
That was certainly the case for many of the ships in port. 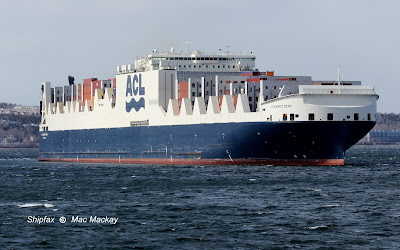 Atlantic Container Line's Atlantic Star sailed for New York in the early afternoon. Built in 2015 it was the first of five fourth generation ConRos (the largest in the world) built specifically for ACL's transatlantic service. Only three of the ships are in service - two remain at the shipyard in Shanghai for unexplained reasons. 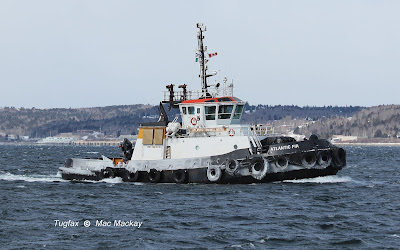 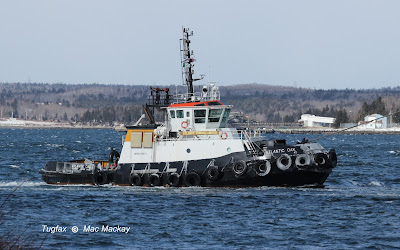 On their way through the Narrows, they passed the tug / supplier Atlantic Shrike which is in the last stages of fitting out at pier 9A.  Today it was loading lube oil. 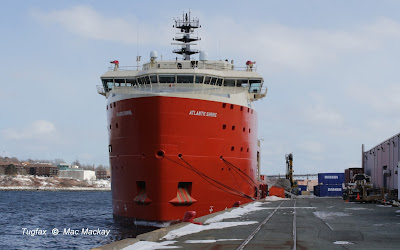 Its sister Atlantic Griffon sailed for its new home port of St.John's last week, to join Atlantic Heron already delivered from Romania via the Netherlands. (The fourth tug in the series, Paul A. Sacuta is en route from the Netherlands.)  All four are owned by Atlantic Towing Ltd. Griffon and Shrike were completed in Halifax after their hulls and superstructures were delivered from Romania. 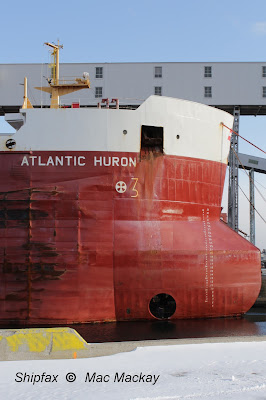 Meanwhile at pier 27 the bulk carrier Atlantic Huron is now fitting out for the Great Lakes shipping season after a two month winter layup. Today it was ballasted by the stern exposing its bow thruster. The ship is owned by Canada Steamship Lines and owes its name to the fact that it can operate on the Great Lakes and deep sea. 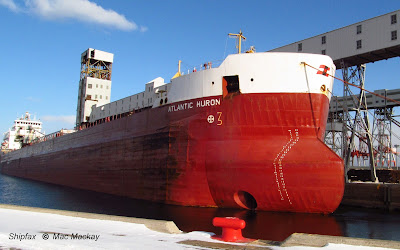 The interesting shell plating transition that was required to widen the mid-body of the ship was also revealed and shows how awkward it was to increase the ship's tonnage to maximum St.Lawrence Seaway dimensions. The additional cargo carrying capacity was apparently worth the effort.