With the arrival of Daylight Saving Time there are new opportunities for evening ship watching and ship photography. 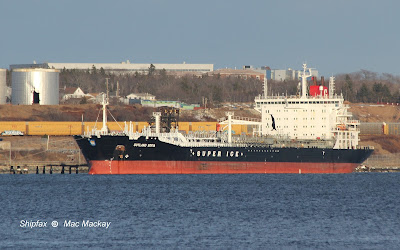 In the background a long string of auto racks await room at Autoport, and another of Imperial Oil's oil tanks has a large hole in the side as demolition continues on the former refinery.

This is another member of the Gotland Rederi AB fleet of Norway, several of which have visited Halifax before. The "Super Ice" ship was built in 2007 by Guangzhou International and measures 29,283 grt, 53,187 dwt and  stands out due to its large superstructure and full width bridge. The penguin symbol on the house seems to have displaced the usual "No Smoking" signs.

Difficult as ever to take a picture of a ship berthed at Halterm, I did make an effort this time since it is a first time caller on the Columbus Loop. The Singapore flag Kota Lumayan is a very small ship for the service operated by CMA CGM and current partners UASC and COSCO.  Since that partnership is about to change April 1, it is possible that this ship is a fill-in and may not be back. It is operated by Pacific International Lines, [thus PIL on the funnel] (which is not a partner in the service) on charter to COSCO. 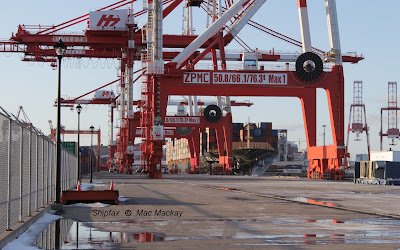 The most recent schedule for the Columbus Loop still shows UASC ships. UASC has been acquired by HAPAG-Lloyd and will be leaving the group. OOCL and Evergreen will be joining, so we may ships from those lines in the coming months.