To the Basin for shelter

With another major storm passing through from the south, Bedford Basin is once again hosting a number of ships. Of these only the Canadian cargo ship Evans Spirit is making a detour from its normal course to seek shelter.

The ship is en route back to Sept-Iles, QC in ballast, from the US after delivering another cargo of aluminum. This is the second time the ship has sought shelter here (the first was on February 9) this winter.  And once again I didn't manage to get any decent photo. 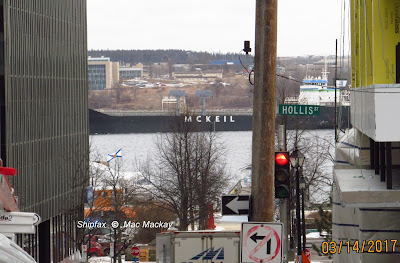 Despite conflicting traffic signals, the Evans McKeil is heading in the right direction - toward Bedford Basin.


The three other ships, all tankers, went to anchor instead of occupying berths at oil docks. The Irving Oil tanker East Coast was the first to arrive and went directly to the Basin rather than tying up at the Irving Woodside jetty. That berth, although it is recently rebuilt, is not suitable in rough weather.

The next arrival was the Singaporean tanker Alpine Venture. It was due to tie up at Imperial Oil number 3 dock, but went to the Basin. Built in 2010 by Hyundai Mipo, Ulsan, the 29,120 grt, 45,046 dwt ship is part of the Transpetrol fleet.

With Atlantic Oak made up astern as tethered escort, Alpine Venture lines up for the Narrows and Bedford Basin.

The third tanker is Gotland Sofia (see yesterday's post). It moved from Imperial Oil number 3 dock, which is also an untenable berth in a storm. The ship may have completed unloading in any event, so will likely be heading to sea once the storm passes.

There was one sign of spring in the harbour however. The research vessel Coriolis II ventured away from her layup dock at the old Coast Guard base for some harbour trials. 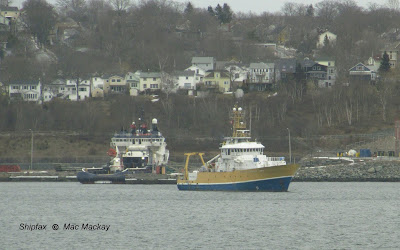 The former CCGS John Jacobsen was built in 1980 by Versatile Pacific in Victoria, BC as a 500 class rescue cutter CCGS 501. It was renamed in 1992 and declared surplus in 2000, becoming 2000-03. In 2001 the Université de Québec à Rimouski bought and renamed the ship for research use by a consortium of Quebec universities and research institutes, under the umbrella name of Institut national des sciences de la mer (ISMER)  It is also available for commercial charter work.

The former Coast Guard base is to become the Centre for Ocean Ventures and Entrepreneurship (COVE), but has already become the stopover site for research and offshore vessels in layup or conversion such as Trinity Sea (background of photo above.)
See: COVE