Höegh Singapore in the wind

The autocarrier Höegh Singapore used three tugs to berth at Autoport today. High sided autocariers are particularly difficult to manage when it is windy, so the third tug was an added safety measure. 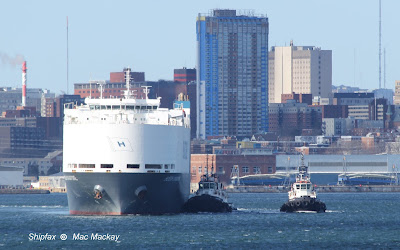 As the ship rounds Ives Knoll, the tug Atlantic Oak stands by as the other tugs are secured alongside using bollards set into the ship's hull. 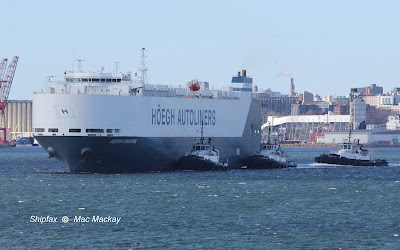 For a time it appeared as if Atlantic Oak was going to assist, but it stood off. There was no room between the Atlantic Willow (forward) and Atlantic Fir (aft) for the Oak to tie up. 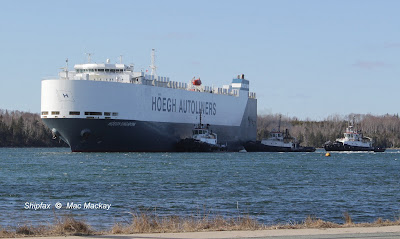 Once in the Eastern Passage turning basin, as the ship was well into its turn, Atlantic Oak finally began to come alongside.
The yellow buoy marks the limit of the turning basin. 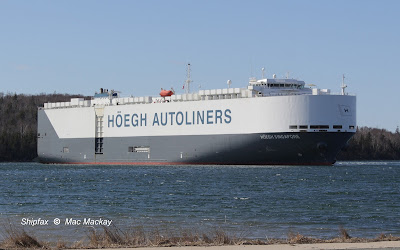 Once the ship was mostly turned, the tugs were no longer visible. The third tug would assist in backing the the ship to its berth.
The inset hull bollards are visible on close inspection, and tug pushing points are marked with vertical white arrows.

Höegh Singapore is a mid-size autocarrier of 47,266 grt, 12,250 dwt with a capacity of 4900 cars. It was built in 2011 by Xiamen Shipbuilding Industry Co in China. Flying the Norwegian flag, it is operated by Höegh Fleet Services of Oslo.
Höegh is no longer a regular caller in Halifax, but their ships do call while under charter to other lines, or on slight deviations from their usual routes. The ship is en route from US east coast ports to Antwerp, so will be loading export vehicles, although it may have some import cargo too.