Frigid air temperatures (-10C range), cold sea water (+1C range) and winds (25 knots) make for ideal freezing spray conditions. All that is needed then is some cold steel of a ship's hull and icing will occur.
Today's afternoon arrivals had only a thin film of ice, since both ships were coming from the south and did not have prolonged exposure to the arctic like conditions.

With Atlantic Oak on the stern and Atlantic Willow "riding shotgun" the Performace has cleared the Angus L. Macdonald Bridge inbound in the Narrows. 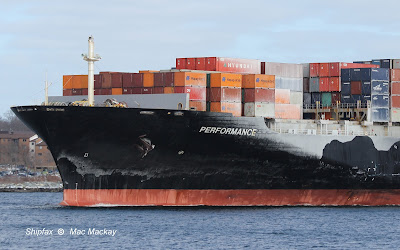 AHS Hamburg arrived on its bi-weekly visit for Tropical Shipping, with a bit more spray, acquired on the last leg of its trip from Palm Beach, FL.  It is one of two ships serving Tropical Shipping from Halifax and made its first call January 16. The other ship, Vega Omega, inaugurated the service with its arrival January 8.

Built by Jinling Shipyard in Nanjing, China in 2008, as Pacific Hawk it was a member of the Bockstiegel Reederei fleet until 2012 when it took its present name and joined the Carsten Rehder fleet of Hamburg. Measuring 9957 grt, 13,760 dwt the ship has a capacity of 1118 TEU and carries two 45 tonne cranes mounted on the ship's centre line. The ship is registered in Antigua and Barbuda, the flag of choice for many German ships.