One sure sign of spring is the opening of the St.Lawrence Seaway, due Monday, March 20. Once decried as the death knell of the port of Halifax (along with winter navigation on the St.Lawrence River) neither has proven to be the case over time.

Halifax was once favoured as an ice free winter port when ice in the St.Lawrence closed the waterway to most navigation. However when the federal government began to break ice for commercial shipping in the 1950s (under the guise of flood control on the upper river - which it always had done in spring) the Port of Halifax feared that it would become a backwater. In fact it became year round port - just the opposite of conventional thinking of the day.

So it was when the St.Lawrence Seaway opened in 1959 and larger ships could access the Great Lakes for the first time, the doomsayers predicted it would be the end of the Halifax as a port. That has also not proven to be the case. Many ships are too large for the Seaway anyway and the trip is too long for priority cargoes such as containers, and Halifax has certainly not suffered. For a time the port was a busy transfer port for grain coming from western Canada via the Seaway. That was a result of skewed rail rates, and now Halifax only gets periodic grain cargoes, mostly for domestic use. Nevertheless , on balance, Halifax has not been harmed by the Seaway, and has probably seen some benefits.

In fact we now have our own "export" cargoes to the Great Lakes too.
National Gypsum exports most of its cargo to the US, but Canadian ships also load from time to time. Such was the case today as the Atlantic Huron took on its first cargo of the season and headed for "Upper Canada" this afternoon 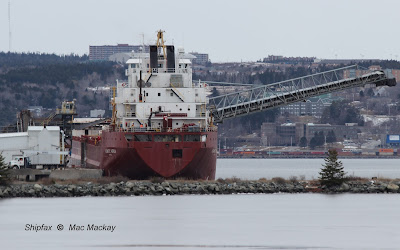 Atlantic Huron at National Gypsum has its self unloading boom swung out overside to allow the travelling ship-loader to move along the docck and reach all hatches in turn. It makes several passes the length of the ship during the loading process to ensure an even loading pattern. The loader is visible at left with its high control cab and covered conveyor house.

After a winter maintenance period in Halifax since January 2, the ship got under way yesterday and moved to the gypsum pier at Wright's Cove in Bedford Basin to load.

Another sign of spring the arrival of the Fisheries and Oceans research ship CCGS Teleost. It often goes into refit for the winter and then comes to work in Halifax until ice clears out of the Gulf of St.Lawrence - its usual area of operation. The ship is based in St.John;s, NL as is fleet mate CCGS Alfred Needler, which also works from Halifax in winter. 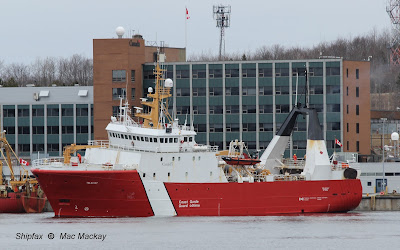 Fresh from drydocking, Teleost has spotless paint, but apparently needs some ballast adjustment. While turning to back into its berth at the Bedford Basin it listed noticeably several times.

The ship was built as the factory stern trawler Atlantic Champion in 1988. Construction started at Tangen Verft, Kragero, Norway, but was completed at Langsten Slip-Batbyggeri A/S in Tomrefjord. Acquired from Clearwater Seafoods in 1994 it was converted for research work and renamed. It now measures 2405 grt - up from 2336 as built.

Autoport is still processing hoards of cars for the spring sales rush. Some of the backlog has been cleared however and overflow areas emptied - but the cars keep coming.

Today's caller was the Blue Ridge Highway. Despite being built as recently as 2009, it has the appearance of a much older type of autocarrier. The 48,927 grt, 15.290 dwt ship was delivered by Nantong COSCO KHI in Nantong, China to Fukunaga Kaiun KK, and operates for K-Line. 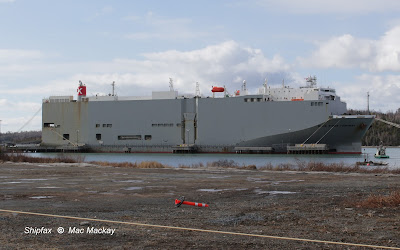 An overflow car storage area is empty now, but was full for the past few months.
The line tug Roseway awaits departure time to let the head lines go from the Autoport mooring buoy (at right - out of the picture).

Unlike modern autocarriers the ship does not have the streamlined rounded car decks above the bow, and has numerous deck openings in the sides of the ship.

Also in port yesterday the autocarrier MSC Immacolata required crane assistance to release a fouled wire, and was turned end for end at Pier 31 after unloading some RoRo machinery. It had unloaded cars at Autoport Thursday.