The bulker Lake Ontario anchored in the lower harbor today to take on bunkers. En route from New Orleans to Montreal, the ship is well known in the Great Lakes area under two names.
Built in 2004 as Lake Ontario the ship was soon renamed Federal Manitou when it entered a charter agreement with Fednav. In 2011 it reverted to its original name, and still calls on Great Lakes and Seaway ports. 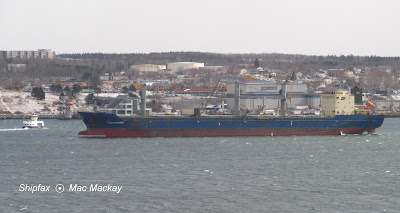 Bright sun partially makes up for brisk winds and unseasonably cold temperatures as Lake Ontario stains at her anchor chain. The ferry is bound for the Woodside terminal, which is visible behind number one crane.


The ship is built to a convenient size for the St.Lawrence Seaway and measures 18,825 gt and 27,783 dwt. It is fitted with three 30 tonne cranes. A sister ship named Lake St.Clair was built in 2005, but has carried the same name ever since.

Shortly before sailing this evening with some direct sunlight on the hull, a large rusty patch showed up near the bow. This is testimony to numerous passages through St.Lawrence Seaway locks, where ships drag along the "knuckle" to enter locks. (And not a lick of paint since the 2016 season!)

The ship is owned by Sunship Schiffahrtskontor AG of Emden, Germany, flies the flag of Antigua and Barbuda and was built by Guangzhou Wenchong shipyard in Guangzhou, China.