First was Isaac Newton the Luxembourg flagged cable laying leaving its berth at Pier 9c for trials in Bedford Basin. The ship was working on trenching and cable laying  for the New Brunswick-PEI power cable project. It was was granted a coasting license from October 13 to Decmber 23, 2016 to carry out the work. The project experienced delays and when winter set in the ship laid over in Charlottetown for Christmas (Isaac Newton's birthday) then on to Halifax, arriving January 14. On Tuesday, March 14 the ship put out to sea, and returned on March 17.
Today it went to the Bedford Basin and conducted Remotely Operated Vehicle (ROV) trials, expected to tak 12 hours. The ship's new coasting license to complete the cable work extends from March 15 to June 15. 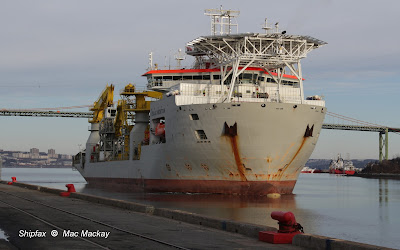 Getting away from the pier the ship turns in the stream with a little help from its thrusters.

Using one of its cranes, the ship lowers it ROV for trials, while maintaining position with thrusters. 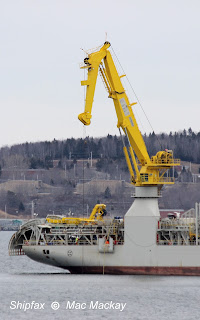 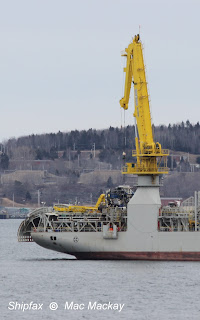 ROV back on deck late in the afternoon.

Sir Isaac Newton was a mathematician (generally credited with laying the ground work for calculus) and astronomer (developed the first practical reflecting telescope) and physicist (described the laws of motion and gravitation) and was Britain's pre-eminent scientist (1642-1726/27)[the Gregorian calendar changed in his lifetime].

Once the Isaac Newton cleared the Narrow, CCGS Sir William Alexander got under way from the Bedford Institute and headed out to service some local buoys, including H22 (Ives Knoll) in Halifax harbour and approaches. 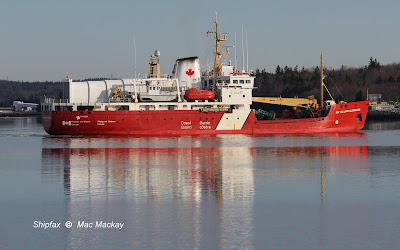 Backing away from the BIO pier. 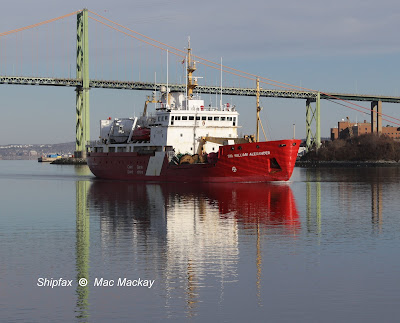 Setting out through the Narrows. 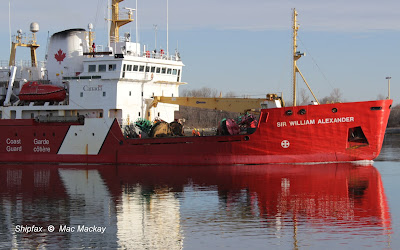 Crew members on the cargo deck prepare for work, amid a collection of buoys.

Sir William Alexander, First Earl of Stirling (1567-1640) was a royal courtier and poet in the court of  King James VI of Scotland (who was also King James I of England). He was appointed mayor of a huge territory comprising much of present day Nova Scotia, New Brunswick and part of the northern United States. He established a settlement at Port Royal, Nova Scotia (previously settled by Samuel de Champlain) but the region was ceded back to France in 1632.  A few year later he was granted title to much of Long Island, New York, although it was disputed by the Dutch for many years.
Although he personally never trod on Nova Scotia soil, Sir William did establish the legitimacy of the British claim to the area, and provided Nova Scotia's coat of arms and provincial flag.