My usual Saturday harbour tour took in most of the activity today.

The Dutch cargo ship Dynamogracht arrived as sun began to burn off the early fog. It headed for Pier 9C to load drill pipe that appeared on the pier during the last week or so.

The pipe is not new, so has apparently been reconditioned for re-use. The fact that the ship is Dutch leads me to believe that the pipe is from the aborted Shell exploration project in the Shelburne Basin. The project was cancelled when no oil was found and Shell learned that it was too difficult to drill anyway.

The Canada Nova Scotia Offshore Petroleum Board - in its wisdom, along with  Environment and Climate Change Canada [I always wondered who was in charge of that] and Fisheries and Oceans Canada - have unforgivably allowed Shell to abandon its dropped riser pipe from the first well.  All  2100 meters of the pipe will apparently be resting on the seabed for eternity simply because it doesn't pose a threat to navigation or the environment. It was dropped in March 5, 2016 when the drill ship Stena ICEMAX was attempting to recover the drill stem in bad weather.

The fact that a multi-national company would be allowed leave its garbage behind simply because it is costly to recover says a lot about our regulation, regulators and the power of big oil. I understand however that Shell has to apply for a permit! If I had my way the cost of the permit would equivalent to recovery costs plus a multiplier.

In any event some drill pipe that was not dropped on the ocean bed will be loaded aboard the Spliethoff ship Dynamogracht at pier 9c. 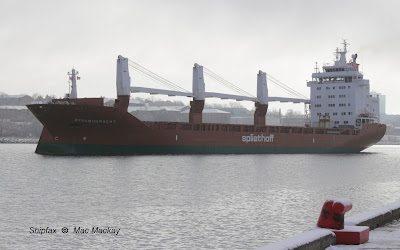 The ship is one of eight D class ships in the Spliethoff fleet and was built in 2010 by Jinling Shipyard in Nanjing, China. Measuring 13,7096 grt, 17,967 dwt it has box shaped holds and three 120 tonne capacity cranes mounted on the starboard side of the ship.

An unusual feature of the ships of the D class is the second navigation bridge, located atop the normal bridge. Called the "tutorbridge" it is used to train cadets (who may be housed in the strange section of the accommodation block that appears to have been added on aft at the last minute.)  The tutor briage has all the equipment of a normal ship's bridge, but does not control the ship.
With more than 100 ships in its fleet, Spliethoff's (and its subsidiary BigLift, which also has D class ships, but of a different type) conducts an active apprenticeship program for junior ship's officers. 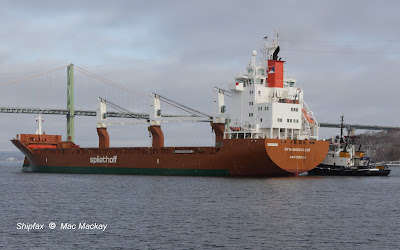 Atlantic Willow assists the ship as it near Pier 9 C.

CMA CGM Figaro nears Halterm as it arrives on Columbus Loop service.  A regular on the run, it made its first appearance November 7, 2015.

At HMC Dockyard, HMCS Charlottetown has been lifted out on the Synchrolift for maintenance. 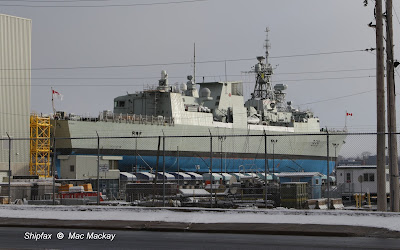 Built at Saint Dry Dock and Shipbuilding and commissioned in its namesake port September 9, 1995, it was handed back to the RCN June 5, 2014 after a ten month refit at Halifax Shipyard. It sailed from Halifax in June 2016 for service in the Mediterranean and last fall participated in exercises off Scotland. It returned to Halifax January 13, 2017.

At Irving Oil the tanker Nordic Amy was finishing up its work and preparing to sail this evening. It arrived in Halifax late Thursday from Saint John.

Despite the Esso sign in the background, the ship is tied up at the Irving Oil Woodside terminal, next door to the former Esso refinery.
Built, predictably, by Hyundai Mipo in Ulsan, in 2008 the ship was delivered as simply Amy. It took its present name in 2014 for Nordic Tankers of Hellerup, Denmark. The ship is managed from Singapore and flies the Singapore flag. Its measurements are 23,224 grt, 37,759 dwt.