This morning the Dutch cargo ship Onego Merchant arrived at pier 27 with a cargo of rails from Szczecin, Poland. The ship also had a coating of frozen spray, which an orange suited crew began to chip away to be ready to start unloading tomorrow. 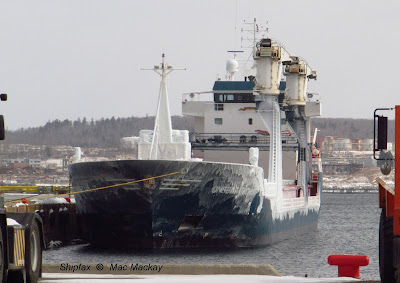 The 6301 grt, 8700 dwt ship was built in 2002 by Bodewes Volharding shipyard in the Netherlands and is standard ship of their 8700 class. Featuring box shaped holds and pontoon hatches, it carries a pair of cranes and a travelling gantry to lift the hatches. 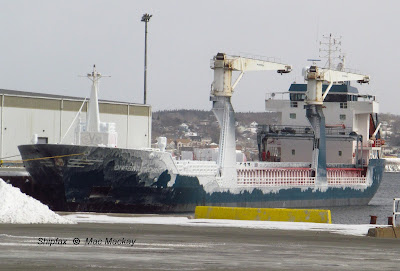 It began life with the name Dewi Parati but was renamed Beluga Spirit briefly in 2003, but soon reverted to its original name. It became Texel in 2008 and in 2011 Onego Merchant. It then reverted to Texel from 2013 until February of this year. It has been owned since 2008 by Kustvaart Harlingen, BV and is on charter to Onego Shipping and Chartering.