Michelle C in for a top up

The general cargo ship Michelle C put in to Halifax this afternoon for a short stay - just long enough to top up on fuel. Bound from Philadelphia for Sorel, the ship was met at pier 27 by a fuel truck from RST Transport. 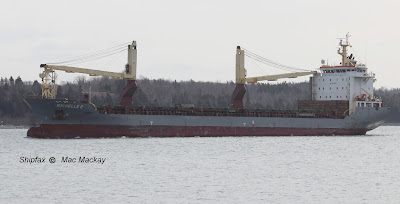 Michelle C was built by Jiangsu Yangzijiang in Jiangyin, China for Carisbrooke Shipping, the notable British company based on the Isle of Wight.  It is equipped with two 80 tonne cranes serving large box shaped holds with portable tween decks, allowing it to carry a variety of cargoes. Tonnages are 9,530 grt and 12,946 dwt.

Immediately upon completion in 2010 the ship was renamed Nirint Pioneer for a charter to the Dutch company Nirint Shipping. It reverted to its original name in 2011. By coincidence another Nirint charter was in port today too. Asian Moon was unloading its usual nickel concentrate cargo from Cuba, at pier 31. 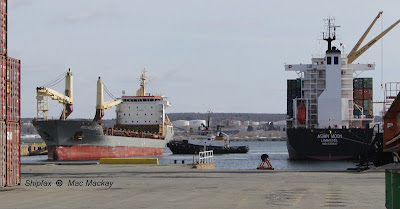