CCGS Pierre Radisson has been conducting engine trials off my place since Friday. Ranging between Gros Cap-à-l'Aigle and Cap-aux-Oies, the ship has spent most of its time anchored off the Kamouraska Islands, in the south channel, directly across the river from my front door. 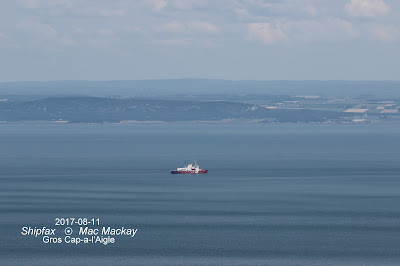 About 3 miles off Gros Cap-à-l'Aigle on Friday, the ship began its trials.

The ship is conducting propulsion trials, which seem to be related to a major Vessel Life Extension project (VLE) announced August 10, 2016. Verreault Navigation of Les Méchins was awarded an $8.6 mn contract for the majority of the work, which included hull re-coating, steel work, reconditioning the flight deck and hangar, and replacement of the windows. At about the same time Canadian Maritime Engineering was awarded a contract to replace the steering system.


ABB received a separate $3 mn contract to provide new hardware and software including eight new drives in the power distribution system. All this follows a 2011 project that replaced its six main engines and 3 generators. 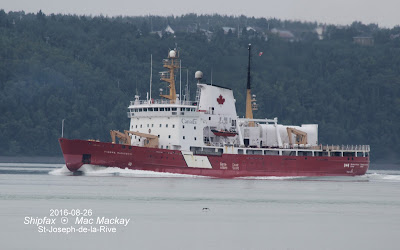 Last year I caught the Pierre Radisson heading for refit at flank speed.

The ship was decommissioned for the Verreault project, with the crew due to return to the ship in January 2017, with the shipyard work to be completed by January 31. The ABB contract was to be complete and commissioned by June 2017, but that my be what they are working on now.

Built by Versatile Pacific Shipyards Ltd in Vancouver, CCGS Pierre Radisson was delivered to the CCG in June 1978 and conducted its trials and delivery voyage by the Northwest Passage. It is based in Quebec City. It is the lead ship of the Type 1200, Arctic Ice Class 3 Medium/River Icebreaker.