Another ship that may be a familiar sight on the St.Lawrence for some time to come is the bulk carrier Ferbec. The largest ship in the CSL domestic fleet, it is also the second ship to carry the name for the comapny and is plying the same route as its illustrious predecessor.

The ship carries ilmenite ore from Havre-St-Pierre to Sorel-Tracy on a continuous shuttle operation for Rio Tinto Fet et Titane. 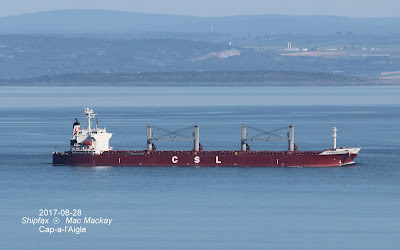 The current Ferbec entered service in May of this year when it was registered in Sorel May 18. It was previously sailing for CSL's international fleet as CSL Melbourne since 2010. Built in 2002 by Nantong Cosco KHI in Nantong, as Orientor and carried the name Orientor 2 from 2002 to 2010. It is a Handy Size bulker of 27,198 grt, 49,502 dwt fitted with four cranes and grabs to work cargo.

Its predecessor of the same name was a gearless bulker, built in 1966 by IHI, Tokyo as Fugaku Maru and acquired and renamed by CSL in 1977. Its sale for scrap in 2005 raised the ire of environmentalists, because it was known to contain hazardous materials. Renamed Michalakis under the Mongolian flag, it sailed to Alang, India where it was beached for scrapping March 24, 2005.

Havre-St-Pierre is the loading port for the ore, which is mined at Lac Allard 43 km inland and transporter by rail to the port. Established in 1950 by Quebec Iron and Titanium (QIT) the mine yields high grade titanium dioxide which is refined to development metal powders used as white pigment for paints, paper and numerous other commodities.

The mine has been operating at reduced capacity for some time and will only run for 24 weeks this year, however that may result in a sufficient stockpile to keep the ship running. However Rio Tinto has another mine, this one in Madagascar, that could potentially supply the Sorel-Tracy operation at lower cost.