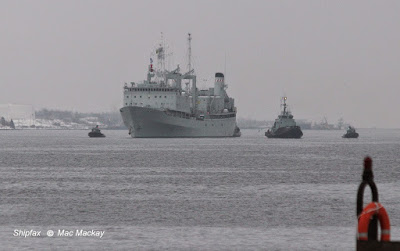 File photo: Preserver in use as a fuel shuttle, relied on tugs to move it between the HMC Dockyard and Imperial Oil after it was withdrawn from seagoing in 2014.

Although I was not in Halifax to see it go, I followed yesterday's departure of the decommissioned HMCS Preserver on the internet.

The tug Lois M of McKeil Marine got underway on schedule at 1030 hrs, and with assistance of the Dockyard tugs Glenevis and Glenbrook they were soon off the berth. The latter tug was tethered aft as stern escort.

Once out to the Middle Ground area, inside Meagher's Beach, the ship pilot disembarked to Scotia Pilot while the pilot assigned to the tug remained on board until reaching the pilot station.
By this morning the tow was making good progress and was off Guysboro.

The ship was sold to Marine Recycling Corporation of Port Colborne, ON, and there was idle speculation that the ship would be towed to the Great Lakes to be broken up. This was never in the cards. Although the ship could fit into the Seaway locks, it would have been an expensive proposition to tow it all the way to the Welland Canal. There would also be the question of the many delays caused to commercial shipping with such an ungainly tow.

Despite protestations in the press that they are not in the ship scrapping business, Heddle Marine of Hamilton, ON, a company associated with McKeil Marine, was instrumental in having the ship broken up in Nova Scotia. McKeil and Heddle have leased the Sydport area in Point Edward, NS as a ship repair and staging base, with an option to purchase the entire facility. They have apparently sub-leased some of the space to MRC and that is where Preserver will be broken up.

MRC has also acquired the retired ferry Princess of Acadia, the research vessel Quest (and possibly the destroyer Athabaskan) all of which will also be cut up at the facility. Heddle was contracted by the federal government to provide shipkeeping services when the ferry was retired and laid up  at Sydport.

MRC will undoubtedly use the facilities of Heddle Marine to assist in the initial dismantling and removal of recyclables and re-usables from Preserver and the other ships. There is still a plan to remove the marine re-fueling gear from Preserver for re-use by the RCN.

File photo: Preserver in its role as a floating gas station allowed RCN ships to refuel within the Dockyard until permanent fueling facilities could be arranged after Imperial Oil shut down its refinery and became a deport only.

The last of the Canadian Navy's supply ships, Preserver was laid down built in Saint John, NB in 1967, launched in 1969 and commissioned in 1970. It is ironic that its arrival date in Sydney harbour will be very close to the anniversary date of August 7, 1970.

It was removed from seagoing service in 2014 with corrosion, electrical issues and other problems, and finally decommissioned  October 21, 2016. Its disposal for scrap has very rapid by Canadian standards, which is partly explained by the fact that instead of the RCN's own forces removing re-usables, the MRC/Heddle operation will do that work.

Preserver's twin fleet mate Protecteur has been scrapped by R.J.MacIsaac in Liverpool, NS which has left the RCN in an awkward position of being unable to refuel its own ships at sea.

The fueler to be named Asterix Resolute is expected  to come into service this fall. It was recently unveiled at Davie in Lauzon, QC. A converted container ship hull, that ship has been contracted to serve the RCN until 2021 (at the earliest) when the RCN takes delivery of the second of two Queenston class fleet replenishment ships. It is not clear at this point how the fueling gear will be transferred to the Asterix  Resolute, but if it is done, McKeil / Heddle have lots of tugs and barges to do the work.