Sundays are often busy days on the river as ships aim to reach port on Monday. Today, despite some heavy showers, tide and time co-operated for a few photos of the dozen or so ships that passed my vantage point.

The speedy Maersk Penang overtook the slower Strandja as they made their way upriver early this afternoon.

Maersk Penang is a familiar sight in Halifax, one of five ships that maintain a Maersk CMA CGM transatlantic service.  Calling on Montreal Monday, westbound, the ships then stop in Halifax eastbound, usually on Saturday. 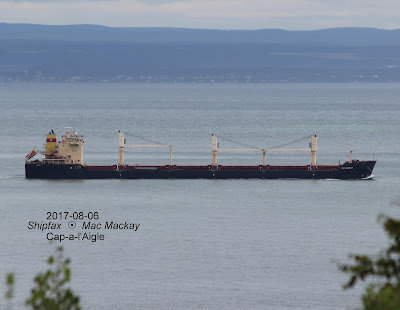 Strandja sails for Navigation Maritime Bulgare of Varna, Bulgaria, whose ships have been regular callers on the St.Lawrence for many years. Their tan superstructures make them easily identifiable from a distance. Launched in 2010 by Shanhaignan Shipyard in Qinhuandao, China as Eastward York, it was renamed on delivery Federal Yangtse, but almost immediately renamed Strandja.
The ship measures 19,865 grt, 29,9800 dwt and is a Seawaymax vessel.

As the showers cleared in the early evening a faint rainbow formed the background as Camilla Desgagnés passed close by upbound. The ship is returning from its first northern supply trip of the season. 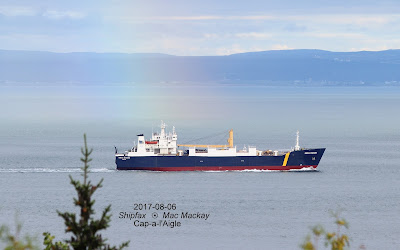 A veteran of the Desgagnés fleet, the ship is the former Finnish newsprint carrier Camilla, that was salvaged off Newfoundland in 2003. Declared a total loss, Desgagnés bought the ship and installed a crane and carried out other modifications to suit it for work in the north.

The northern supply run is in full swing, with most ships back from their first trips and loading or sailed for the second. It is an especially busy year since the port of Churchill has been cut off by railway washouts and is no longer a staging point. In fact some lines are delivering cargo to Churchill for local use.

Nunavut Eastern Arctic Shipping, has added a fifth ship to its fleet. It was downbound this morning at the crack of dawn, too dark for a photo. Named Nunalik (meaning "community"), the ship arrived in Sorel July 30 and was registered Canadian August 4. As with the other ships in the fleet, it was acquired from Spliethof's, the Dutch carrier, which company operates the ships in the off season.
Nunalik has a somewhat different history however, as it was not for Spliethof's.
It started life in 2009 at Jiandong Shipyard in China, and was originally named Beluga Fairy, 9611 grt, 12,662 dwt and as a member of the Beluga F class, was fitted with  a pair of 180 tone cranes that can combine for extra heavy lifts. When Beluga failed the ship became HHL Amazon for Hansa Heavy Lift. In 2016 it was renamed Hemgracht by Spliethof's and used by them until needed by NEAS.

The other major northern supplier, Desgagnés has four former Beluga F class ships in its fleet, and has found them especially useful for their heavy lift capability.