First up this morning was the tanker Las Cuevas from Norfolk for Quebec City in ballast. 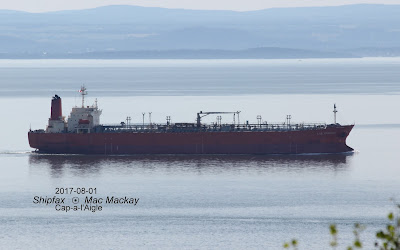 It was followed not long after by Montreal Express doing a strong 20 knots as it stretched to follow the tide. Although bearing a HAPAG-Lloyd name, it is a lease from Sea Spirit Leasing Ltd and also flies the flag of Great Britain. 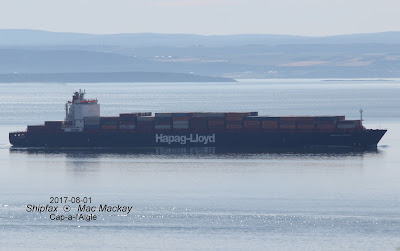 The ship is in itself a bit a of a history lesson, as it was built in 2003 as Canmar Spirit following the naming style of the successful Canada Maritime (a joint venture of CP Ships and Cie Maritime Belge, although CP had bought pout CMB in 1993). In 2005 the Canmar brand was dropped and CP Ships renamed it CP Spirit. Through several acquisitions, CP had become the 7th largest container line. But that position seems to be a curse, and it was swallowed up  by TUI AG and merged into HAPAG-Lloyd in 2005, and in 2006 the ship acquired its current name.
Daewoo Shipbuilding and Marine Engineering built the ship in Okpo, to carry 4402 TEU (including 311 reefers) on 55,994 grt, 47,840 dwt and it was intended for year-round St.Lawrence River service.

Following up at a more sedate speed, Reestborg is bound for Trois-Rivières from Vlaardingen, Netherlands. The ship features a reverse camber bow, and a very small superstructure for a ship with a surprisingly large tonnage of 14,141 grt, 23,249 dwt. 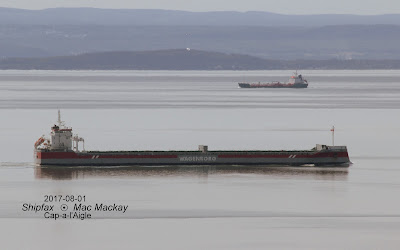 Reestborg was built for Royal Wagenborg by Ferus Smit at the Leer Shipyard in 2013.


Once the tide had crested it was time fir the downbounds. To avoid upbound traffic, most downbounds stick to mid-channel or even use the south channel from time to time, however with no other ships in the area Alkyonis opted for the north shore to gain a little from the tidal backwash. 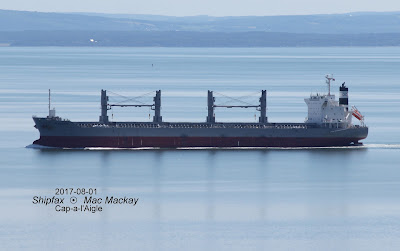 Just above the number two crane is the Morin Shoal buoy, marking a seamount in mid-river.
The telephoto lens shortens the distance considerably.

Rounding up the day with the incoming tide was another container ship, MSC Rochelle. It flies the Liberian flag, and as is common with many MSC ships on the transatlantic route, it has a long history. 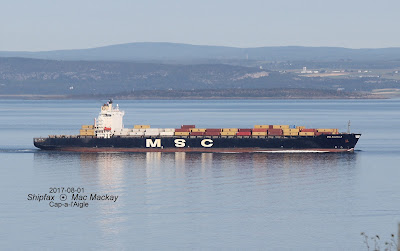 Built in 1997 by Hyundai, Ulsan, it was originally Pugwash Senator named in honor of the Nova Scotia village where Cyrus Eaton founded the Pugwash Thinkers Conferences.  Senator Line was a German company, in which Hanjin acquired a majority ownership in 1997, with Laiesz in the minority. Laeisz was once the owner of the famous Flying P line of clipper ships, and all its ships were named with the the letter P. Although becoming a major container line Hanjin-Senator was also a victim of the curse of 7. Even though it was the 7th largest container line, it ceased trading in 2002.