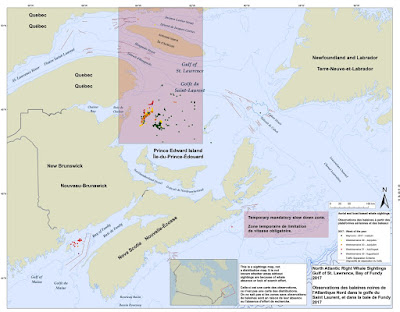 A large swath of the Gulf of St.Lawrence is effected by the temporary speed restriction imposed by Fisheries + Oceans Canada in a perhaps futile attempt to reduce North Atlantic Right Whale mortality.

With up to ten whales of the endangered species found dead in the Gulf of St.Lawrence this year alone, there are fears that the surviving 500 or so whales may be beyond saving.

Ship strikes and fishing gear entanglements are thought to be the cause of the deaths, and some fisheries have also been curtailed, and an order has also been issued to remove phantom fishing gear.

The whales formerly inhabited the mouth of the Bay of Fundy where shipping lane re-routing appeared to have been successful in reducing strikes. However in recent years, for reasons yet unknown, the whales have left the Fundy area and moved to the Gulf. The animals feed on krill near the surface, and perhaps it is that the Gulf provides better feeding. As the western Atlantic warms up, the Labrador current still pumps cold water down through the Strait of Belle Isle into the Gulf and it is likely that the whales have moved to take advantage of better feeding.

That certainly appears to be the case for other whale species. I have seen more minke whales this year than any year I can remember. They feed on small fish such as herring and smelt, but the same water temperature issues may be a factor with them as well. 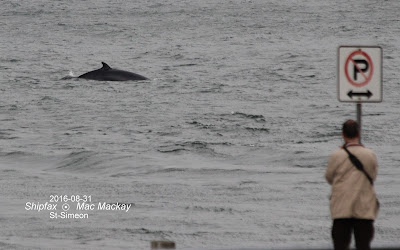 The effect on scheduled shipping is yet to be determined, but will obviously mean increased speed in other zones in order to maintain schedules. The reduced speed zone will result in cost savings for fuel, but the increased speed necessary to make up the time will more than offset any savings. 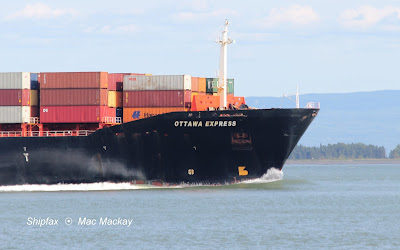 Right whales do not have "sonar" capability of some other species do, and thus cannot sense the presence of ships. They are so intent on feeding and so used to ships that they not distracted by their presence. Let's hope that the speed limits will work in saving this important species.