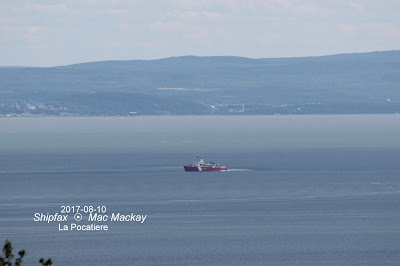 In mid-river, well out of the normal shipping channels, CCGS Louis S. St-Laurent conducts trials. The town of La Pocatière is to the left on the south shore.


Leaving Davie shipyard early this morning, it made its way down river past Cap-aux-Oies where the river widens out to about 12 miles, and spent a few hours doing evolutions as far downstream as Kamouraska, and upriver off La Pocatière.

It then returned up river as far as St-Joseph-de-la-Rive, where it disembarked a party of shipyard workers via the tug/workboat Ours Polaire. 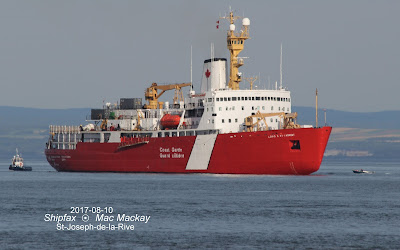 With trials completed, the ship is met by the tug Ours Polaire and an outboard powered aluminum skiff, which seems to be on standby for lifesaving. 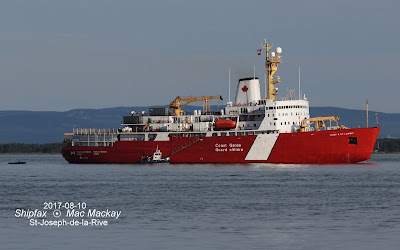 Forced along by the tide, the ship is directly off the St-Joseph-de-la-Rive ferry dock. 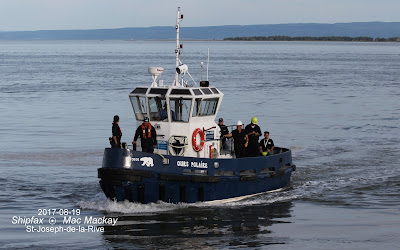 Ours Polaire with a deck load of shipyard techs, heads in where a bus is waiting to take them back to Lévis. Since they were not wearing PFDs I assume the skiff was a precaution. 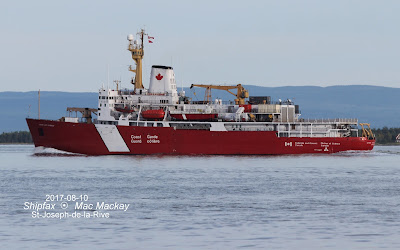 "The Louie" turns up the revs. The stern squat is real.

It made a very tight turn to port, and then took off, soon reaching 17 knots.

The ship had been on a $14 mn refit since February and really took the chance to kick up its heels. Perhaps it is moving with such alacrity because there is still time to participate in northern operations.

While awaiting the return of "The Louie"  there was more shipping to see from the vantage point of St-Joseph-de-la-Rive.

Upbound the HAPAG-Lloyd container ship Ottawa Express was getting a little boost from a powerful full moon tide. 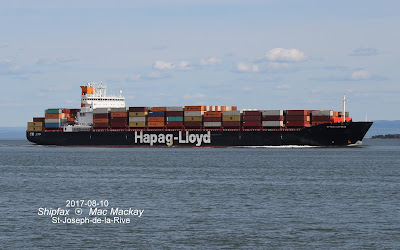 
A ship that is actually older (in part) than "The Louie" was creeping down river against the last of the tide. CSL's Cedarglen is an amalgam of the 1959 German-built Ems Ore. That ship was acquired  by Hall Corp  (with two sisters) and in 1977-78 Davie built a new forebody, and moved the island bridge aft. (That necessitated extending the funnel.) Renamed Montcliffe Hall it served Halco until 1988, when that company went out of business. It then went to N.M. Paterson + Sons Ltd where it served as their Cartierdoc. Paterson wound up their business after sister ship Windoc was badly damaged by a untimely bridge lowering in the Welland Canal. CSL acquired the Paterson fleet in 2002. 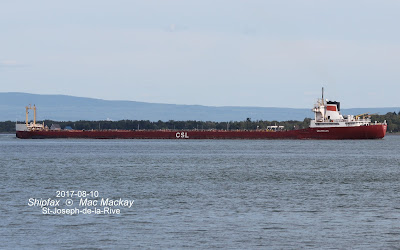 With a full load of grain, and against the last of the rising tide, Cedarglen makes no haste.

As Cedarglen the CSLer is one of the oldest cargo ships still operating on the St.Lawrence. It is headed from Montreal for Baie-Comeau, and at 6.4 knots was soon overtaken by the racing "Louie".