The temporary speed restriction in the Gulf of St.Lawrence is having an effect on the whales it is intended to protect and on ship schedules.

No ship strikes have been reported, and no dead whales have been found since the ban was instituted. The fallout for shipping has been predictable.

Some inane suggestions about helicopter escorts, special sonar and other speculations on how to speed up ships and save whales have been proposed by some in the shipping industry. If these geniuses would turn their minds to the environment instead of the bottom line for a few moments, they might realize that they and their customers will just have to pay for the privilege of sharing this planet with whales. 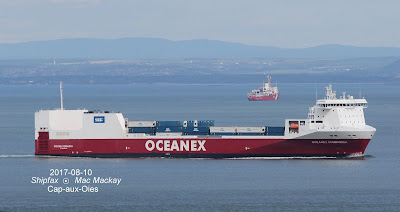 Oceanex Connaigra used to be a daytime Saturday sighting, now it passes at night.


The effect on domestic shipping has seen Oceanex introduce a temporary fuel charge to pay for the higher speeds required in other areas to make up for the five hours of slow steaming in the Gulf. Oceanex competes with trucks and Marine Atlantic on what is a far from level playing field, and any change of schedule or costs would certainly hurt them. 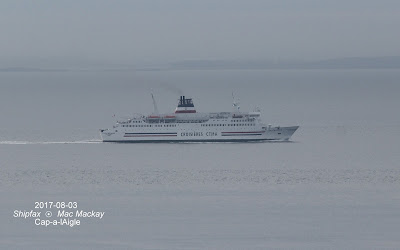 CTMA Vacançier is back to early Thursday mornings.

C.T.M.A., which serves the Magdalen Islands, has curtailed stops in Gaspé in order to keep their cruise ferry CTMA Vacançier on schedule. After a couple of weeks of trying to maintain the schedule, the ship is now reaching Quebec and Montreal on close to the old timetable. 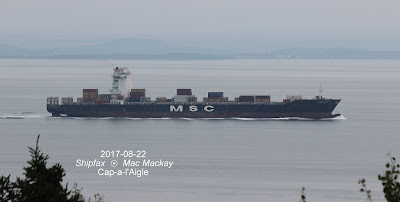 MSC Kim was hurry up then wait on Tuesday afternoon.

Foreign flag container ships are making up the time at sea, but there has been some increase in speed on the river too. I note reported speeds in excess of 18 knots, which is a pretty good clip.  Schedules however seem to be in some sort of disarray, as the MSC Kim, charged past my place at 18.6 knots, but then anchored off Pointe-au-Pic for about four hours. Perhaps they were overly enthusiastic about opening up the throttles and had to back off so as not reach Montreal too early. 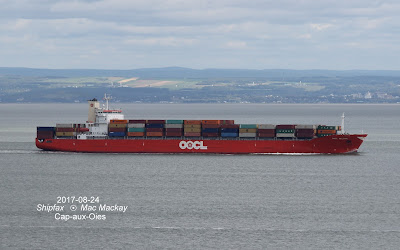 OOCL Belgium made up its time at sea, but was still moving at a good rate this afternoon.

Non-scheduled Great Lakes ships are effected too. Even though the speed reduction does not bother many of them, since they do not go that far into the Gulf (the zone extends as far west as the eastern tip of Anticosti Island) their speed would only be reduced by a knot or two. 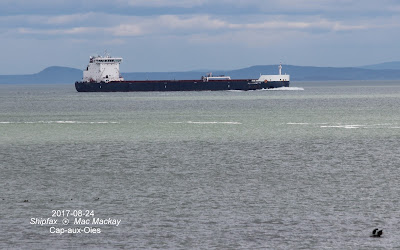 Algoma's newest ship, Algoma Strongfield does not venture far enough east to be effected by the speed limit.


However with a limited shipping season, they need to get in as many trips as possible. Salarium carries salt from the Magdalen Islands, right in the middle of the zone, and it would be difficult to make up lost time in its relatively short trips. 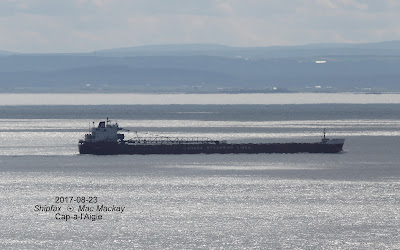 Salarium transits the zone on every trip with salt.

So far I have not heard of any violations of the speed limit.

To add the container shipping misery however, the container carrier Maersk Pembroke was disabled by fire west of the Lizard Point, in the Celtic Sea, August 21. It appears that the ship, which was en route from Antwerp to Montreal, will have to be towed to back to a European port. That will certainly throw a wrench in the weekly service operated by Maersk and CMA CGM.