The cement carrier NACC Québec was upbound this afternoon on its second trip to the Seaway. On its first trip last week,it discharged at a new terminal in Cote-Ste-Catherine.  This trip it will be going to Oshawa. 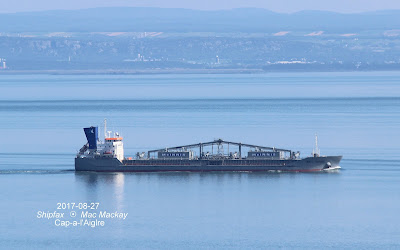 Built by Tuzla Gemi in Tuzla, Turkey in 2011 as  Tenace, the ship was brought into Canadian registry this spring by NovaAlgoma Cement Carriers (NACC). A 50/50 joint venture between Algoma and Nova Marine Holdings SA of Luxembourg the company was established to carry cement in bulk form. This particular ship is in dedicated service to the new McInnis cement plant in Port Daniel, on the south coast of the Gaspé peninsula. It will also be making international voyages seasonally.

The ship started life as a conventional bulk carrier of 9286 grt, 14,600 dwt, but with a special cement loading and discharging system installed its revised tonnages are 10,243 grt, 14,906 dwt. Immediately recognizable by the forest of cargo handling pipes, and the outrageous funnel, the ship will become a regular sight on the river.

The ship was in Halifax briefly August 12.