There has been lots of daytime shipping activity in recent days, but many of the ships appear to be lightly loaded. 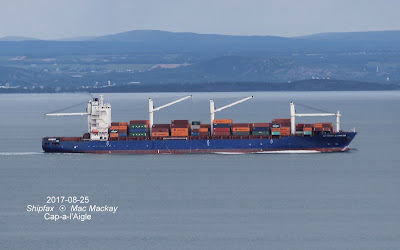 Detroit Express with its ungainly cranes, and light draft is carrying a normal load. Built by Hyundai Heavy Industries and Construction, it was not however built in Korea, but at their satellite shipyard in Subic, Philippines. 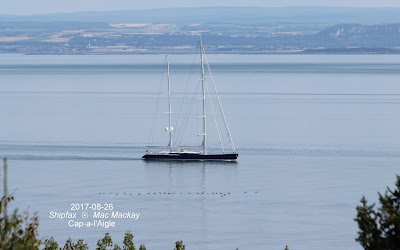 Carrying no cargo at all the sailing vessel Mondango 3 made an impressive sight as it motored up river, on its way from Halifax to Quebec City. The skein of geese is an early sign of autumn. 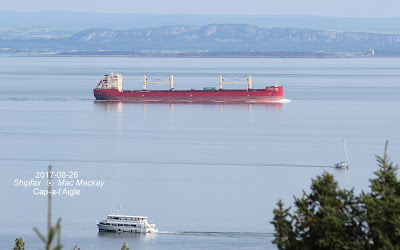 Federal Mosel was also quite obviously carrying little if any cargo, but did sport a lone container on deck. The ship is new this for Fednav. Built by New Times Shipbuilding Co in Jingjiang, China, it measures 22,947 grt, 36,583 dwt, and is max-sized for the Seaway with its plumb bow and no bulb. It is destined for Hamilton, ON.

The tour boar Cabaret has been operating from Pointe-au-Pic this summer, with nature and sightseeing trips to the Gros Cap-a-l'Aigle area, usually twice or three time daily. 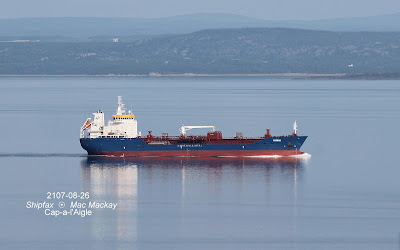 The tanker Patras was also in ballast. It is returning from a delivery to Sydney, NS. The ship is working on a coasting license for Pétro-Nav, due to a shortage of Canadian flag tankers. Pétro-Nav sent two of its small tankers north this summer to refuel various outposts, and so were not available for St.Lawrence cargoes.\