The wharf at Pointe-au-Pic, QC sees on average two ships a month to load paper. The paper is produced by the Resolute mill at Clermont a few miles away and trucked to the wharf warehouse by a shuttle truck and drop trailers running weekdays.

The most frequent caller for the past few years has been Royal Wagenborg's Oranjeborg a multi-purpose RoRo, side loader, dedicated to the forest product trade. It arrived at noon today and began loading immediately. 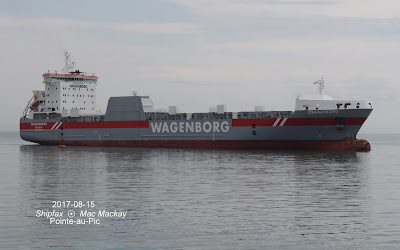 The ship cuts close in to the K64 buoy as it lines for the wharf at nearly full tide.

A flotilla of forklifts bring the paper rolls out of the warehouse and load them through the side door onto ship's conveyors, whence they are moved by elevator to the appropriate deck where ship's forklifts stow the cargo. The ship's holds are climate controlled, since humidity levels are critical to protecting the paper. 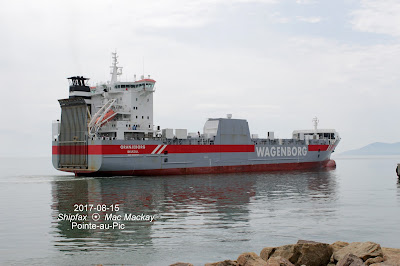 The ship's controllable pitch prop and bow thruster allow it to come alongside without a tug.
Oranjeborg was built by Stocznia Gdynia in Poland in 2004 and measures 18,289 grt, 15,126 dwt.