A bit of everything

There was a bit of everything happening in Halifax harbour today - tankers, container ships and of course  cruise ships.

The Panamanian flag Challenge Procyon arrived during the night and anchored for bunkers, then moved to Imperial Oil;'s number 3 dock. 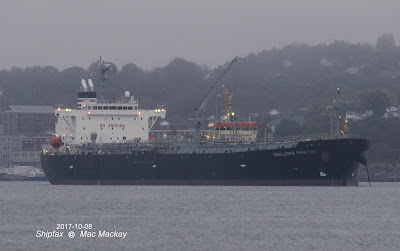 Meanwhile at Imperial Oil, the tanker Steel moved from number 3 dock to number 4. It had arrived from Porvoo, Finland on Wednesday October 3, but appears not to have unloaded any of its cargo.

Imperial's usual source of supply for refined has been the US Gulf, mostly Texas. With recent hurricanes, I am assuming supply may have been limited and they chose to buy on the spot market.  Finland has no domestic source of fossil fuel, much of their oil-based supply coming from Russia, but they do have refining capability and export gasoline to other Baltic countries. Perhaps this cargo did not meet Imperial's standards. 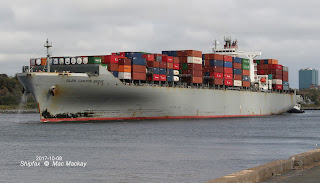 With the sun making a short visit, Glen Canyon Bridge strides up through the Narrows, with Atlantic Fire providing tethered escort. A crew on the forepeak are washing the anchor chain in readiness to anchor, but the ship was due to go alongside directly to the berth vacated by Atlantic Sail.

The veteran Saga Sapphire was in the lead, with a tug alongside to assist it backing in to its pier. Viking Sea was then able to overtake. 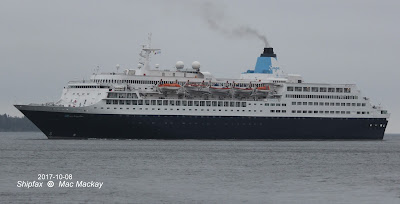 Second in line was Viking Sea. Built in 2016 by Fincantieri Italiani in Ancona, it carries 930 passengers and measures 47,842 grt. It was launched as Viking Sky but switched names with a sister ship delivered this year. Both ship are callers in Halifax this year. 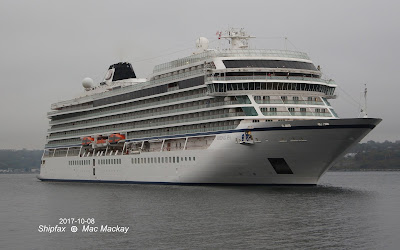 Later in the morning a third cruise ship,  Norwegian Dawn added 2300 more passengers to the count.