No I am not travelling - I am still in Halifax - not in Neah Bay. It is a small port in the northwest corner of Washington State, on the Olympic Peninsula, overlooking the Strait of Juan de Fuca. It is just about as far away from Halifax as you can get on the mainland of North America. 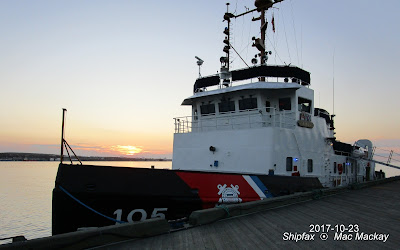 The United States Coast Guard named one of its Bay class icebreaking tugs Neah Bay WTGB-105, after the area where it maintains a base. Although the cutter is based in Cleveland, OH its leaves the Great Lakes periodically for refits, and returns in time for the winter and spring icebreaking season.


It arrived yesterday for a brief stopover on the return leg of its latest trip. 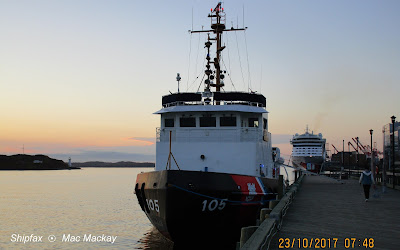 At sunrise this morning, the cruise ship AIDAviva had just tied up at Pier 20 and the George's Island light was cutting through the deep shadows.