There was lots of length at pier 20-22 today - that is if you count part of the Tall Ships Quay. Two years ago the Port installed an extra bollard at the TSQ to use when there are two large cruise ships in at the same time. It has seen frequent use as the ships get bigger and bigger.

The Seawall, as it is called, is just over 610m (2000 feet) long and was built to take two of the largest passenger ships then afloat. At the time however even the largest ships barely exceeded 900 feet, Such ships as Cunard's Aquitania (902 feet) and White Star's Olympic (883 feet) were among the biggest ships, with only the German giants Bismarck (956 feet) and Vaterland (950 feet) closing on triple digits.

Today is was Crown Princess 290m (951 feet) and Celebrity Summit 294m (965 feet) with the bow of the former extending well north of pier 20. With three headlines out to the TSQ bollard the ship was well secured. 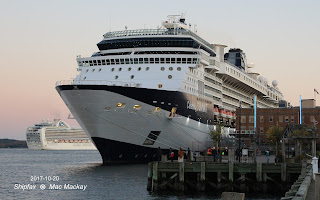 Crystal Symphony sailed first, backing out into the stream from pier 20-22. It was then the turn of Celebrity Summit which called in the tug Atlantic Willow to lend a hand pulling it off the pier and lining it up for its north about run around George's Island. 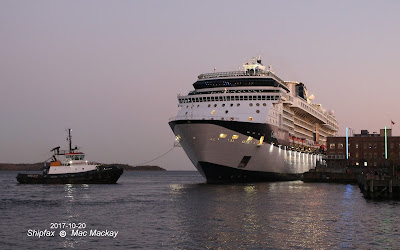 With shorter days there may be very few evening photos for a while.

Unless it is with the smart phone.