Taking ship photos in the early morning from Halifax is much easier when there is a bit of cloud cover as there was this morning.

That meant that Zuiderdam's port side, while in shadow was reasonably visible without the blaring sun directly behind it. 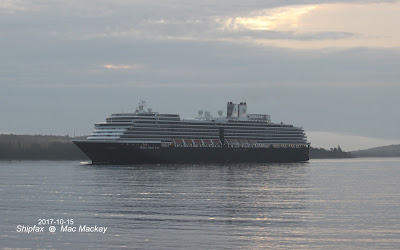 One of four Holland America ships regularly calling in Halifax during the cruise season, Zuiderdam was built originally in  2002 by Fincantieri Breda in Marghera, Italy. It is a Vista class ship, one of four, each named for the directions on a compass (Oosterdam = east, Westerdam = west, Noordam = north and Zuiderdam = south).

The ship has an unusual propulsion system, consisting of five diesel engines (three of 16 cylinders and two of 12 cylinders) and a gas turbine driving electric azipod thrusters. 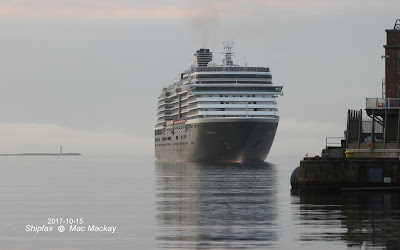