An old expression in the Maritime Provinces to describe fine weather "it's a large day" applied twofold today at Halterm. Bright sun and above normal temperatures coupled with two ships kept the terminal busy.
The morning arrival was Camellia the newest ship on the CMA CGM / Maersk transatlantic service on its second call after permanently replacing the burned out Maersk Pembroke.  It used the two slightly smaller cranes at pier 42. 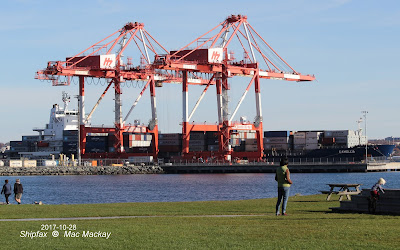 Parents, kids and dogs enjoy Point Pleasant Park as Camellia works at Pier 42.
The mid-morning arrival was APL Houston for the Columbus JAX service. One of four APL ships and 13 CMA CGM ships currently on the service, it is a 109,712 grt, 108,000 dwt vessel built in 2014 by Daewoo, Okpo. As the line upgrades its ships from 8200 to 9200 TEU range, this is one of the latter. It still wears its APL (American President Line) markings more than a year after CMA CGM took over parent NOL (Neptune Orient Line) of Singapore. CMA CGM recently unveiled a new logo and is slowly re-branding its ships and new containers. There is no word on how long APL will retain its identity in CMA CGM. 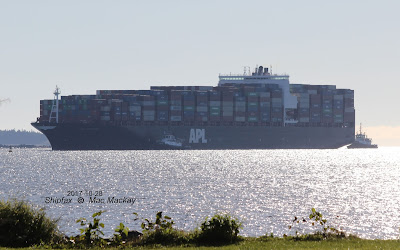 CMA CGM was formed in 1996 with the merger of Compagnie maritime d'affrètement and Compagnie générale maritime, and has grown to have a fleet of 445 vessels. 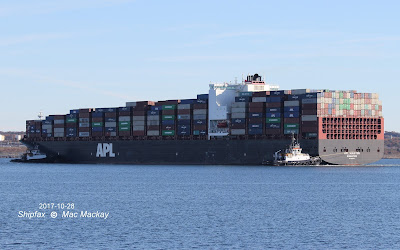 Atlantic Fir on the stern and Atlantic Oak on the bow turn the ship off Halterm. 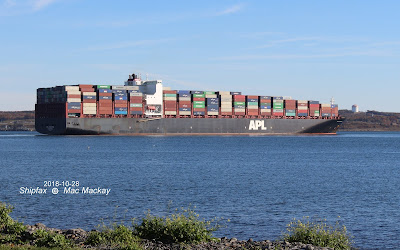 With both tugs now on the port side, the ship backs in toward Pier 41.
\
As soon as Camellia was loaded, the two cranes it was using  moved to pier 41 to assist the two large cranes working on APL Houston. 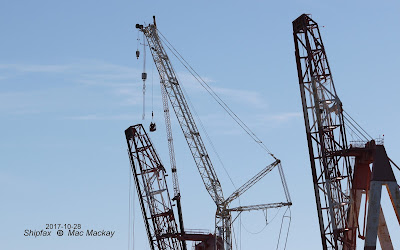 Workers in a basket from one mobile crane assist rigging the second crane to lift off a boom section of the decommisioned container crane. The third crane awaits is fate.

Meanwhile Halterm continues to dismantle obsolete container cranes. Work has started on removing the second crane of three old units. The crane at Pier 36 may be next - it has not been working for months.
Halterm has announced some new equipment recently, such as five high straddle loaders, but so far has not announced new container cranes. Speculation abounds that the operation is due for another expansion since moving container activity to Dartmouth is not feasible. A third 1000+ foot berth with at least two cranes would seem to be the absolute minimum they need to handle future traffic.However they would need to serve any ship with at least four cranes. Adding a contiguous 1100 foot berth to the existing Pier 41 and 42 (each 1,093 feet) would be, to say the least, quite challenging.