Change from the top down

Shipfax is introducing a new header. After several years of using the same header image it is time for a change. Why?

The image in the old header is the Atlantic Container Line G3 container ship Atlantic Compass, taken November 23, 2014, as it enters Halifax harbour with the pilot boat Chebucto Pilot in the lead. Things have changed since then. All of ACL's G3 ships have now gone to the scrappers, with the last, Atlantic Conveyor, beached in Alang, India  October 8.

The five ships in the G3 class served Halifax for thirty-three years and were almost as iconic to Halifax as the Meagher's Beach lighthouse- at left in the background. Now that they are gone there is no ship ready to pick up the symbolic role as yet, so I have chosen to show what will be the way of the future. It is the 10,062 TEU Zim Rotterdam. It was to have been the first ship to of more than 10,000 TEU to call in Halifax, but was edged out by sister ship Zim Antwerp earlier this year.

More larger ships are expected in the coming months and years and the Port of Halifax will be hard pressed to keep up with the demands that such large ships make on the port infrastructure.

Also in the photo, the pilot boat Chebucto Pilot, built in 2012 by Abco Industries in Lunenburg, has been reassigned to Saint John, NB and renamed  Captain E.T. Rogers. A pair of pilot boats, Nova Pilot and Scotia Pilot,  imported from the Netherlands, have now taken over pilotage duties in Halifax.

But speaking of Atlantic Container Line, now that all five G4 ships have been delivered, they continue to require attention due to numerous bugs. On October 5 Atlantic Sea, which was drydocked at the Blohm+Voss shipyard in Hamburg, became entangled in the rigging of a shore crane that was blown over by storm Xayier. The crane appears to have just missed the ship and damage to the ship seems minimal.

ACL's traffic through Halifax has increased dramatically, both in container and RoRo and the line continues to use chartered box boats to meet demand. 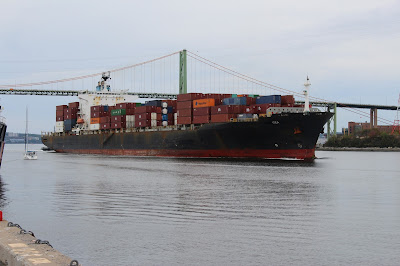 Typical of those is the aging Itea which sailed this afternoon. Built in 1998 the 3842 TEU ship has carried four previous names and seems to be a candidate for the scrappers when its charter ends.
There is no let up in sight to the the trend to scrap smaller (and thus less efficient) container ships to make room for giant new ones. 2017 and 2018 will see more record shattering deliveries and orders for even larger ships.

The new header may not be as long lived as the last one, which like its subject, exceeded normal life expectancy.