News that Seaspan has unveiled the Sir John Franklin at an open house October 1 was followed closely by more news that its illustrious predecessor CCGS Hudson was yanked from the Heddle Marine shipyard in Hamilton, ON on October 6.

The Sir John Franklin is the first of three Offshore Fisheries and Science Vessels to be built under the National Shipbuilding Procurement Strategy, taking precedence over naval supply ships and an icebreaker at the North Vancouver shipyard. A major design glitch, which saw the ship's length increased by 8.4m to overcome a stability issue was one of several notable episodes in the creation of these ships. The $244 mn budget which was to see the ships delivered in 2014 has soared past $687 mn and all are still under construction.

Not the least contentious was the choice of names. The previous prime minster's obsession with discovering the wrecks of Franklin's ships Erebus and Terror was probably a factor in the name choice. Objectors cited Franklin's failure to discover the way out of the Northwest Passage (although in fact he probably did, but couldn't get through) before food and supplies ran out. Historians may be kinder to Franklin in future since contaminated supplies may have been a mitigating factor - time will tell.  Franklin's previous overland expeditions were remarkable and should not be forgotten.

The objection to Franklin on the grounds that he wasn't Canadian is plain silly. At the time of his death there was no Canada per se except as a British colony and all Canadians were only British subjects - just as Fransklin was.

That he was a failure, and that Americans would never name a ship after such a person is laughable. They have a ship named after the man who did not discover the North Pole, but is credited with it nevertheless.

But on to no more nor less a paragon - Henry Hudson. He began looking for a Northwest Passage by sailing up the river that bear his name, on behalf of the Dutch East India Company, incidentally leading to the founding what is now New York City. His work in Canada's north was no more successful in the end than Franklin's. When his crew mutinied and set Hudson, his son James and seven crew adrift in Hudson's Bay they were never seen again. The mutineers, of whom only eight of thirteen survived, reached England,  were not tried for mutiny or piracy, but for  murder and were acquitted.

Both men added greatly to the knowledge of Canada's north - and no they were not perfect.

But back to the ship. The fifty-four year old CCGS Hudson, was in rough shape when it finally sailed out of Halifax in the fall of 2016 for a refit that was supposed to extend until "late spring" 2017. It came as no surprise that once the ship reached the shipyard there was more work to do than originally planned. However the Canadian Coast Guard became dissatisfied with progress and took back the ship, moving it across the bay from Hamilton to Burlington where they plan to get enough work done to sail the ship out of the Lakes before freeze up. Whether it will come back to Halifax for completion or will have to go to another shipyard is not clear. 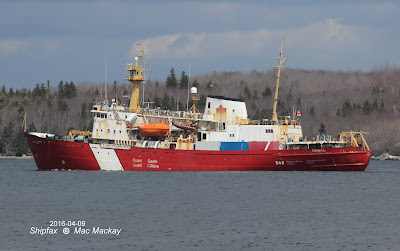