The long standing Norwegian shipping company Kristian Jebsens Rederi AS was founded in 1929. At some point in its history it adopted one of the most identifiable of funnel markings - a blue sawtooth pattern on a white band. Despite many upheavals in ownership following the death of its founder, the company still has a presence, but it is much reduced from its heyday.

Once frequent callers to the Great Lakes and eastern Canada, particularly carrying newsprint, they have now become solely a drybulk carrier as far as I can determine. They were early pioneers in small and short sea beltship type self-unloaders, but that division was sold in 2011 to CSL, forming CSL Europe.

Today's arrival of the Sharpnes was a bit of instant nostalgia for the days when their ships were common sights here. The distinctive funnel marking is still there, as well as the hull banner letters.

One other thing was apparent - the ship came form a Japanese drawing board. This seemed a bit odd until I looked it  up and found that it was built by Tsuneishi Heavy Industries Cebu in Balamban, Philippines. Jebsen has had a long standing relationship with the Philippines, and at one point even had several ships named for Philippine presidents, forsaking their traditional "nes" names.

The current ship is managed by Abojeb, a company originally established by Aboitz Group of the Philippines  and Jebsen., and based in Manila. It provides both crewing and vessel management services. 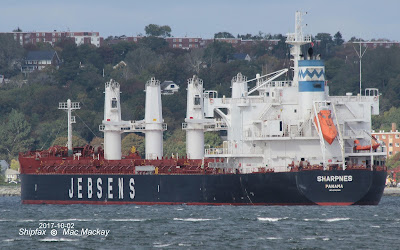 After bunkering Sharpnes sailed for Baie-Comeau to discharge its cargo of alumina loaded in Vila do Conde, Brazil.
Posted by Mac at 8:37 PM