Grain from the Lakes

Another load from the Lakes arrived yesterday on the Algoma Mariner. The amount of grain (could be feed grain, corn or wheat) coming from the Lakes is much reduced from days gone by, when there was an almost monthly arrival. Now it is only a few times a year. Grain continues to arrive by rail however. 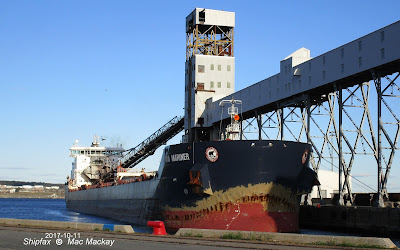 The ship looks a bit like a shark lunging out of the water.
Its hull paint has eroded at the bow wave line.

Ships now unload directly to a hopper that leads to the conveyor system running to the storage elevator. Before self-unloaders were common in the grain trades, ships used a system of buckets on an endless belt that was lowered into the ship. The ship had to move back and forth along the pier so that the "grain leg" could reach all the holds. 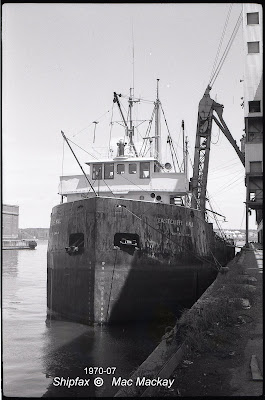 The Eastcliffe Hall under the grain leg in July 1970.

On its return to the Lakes Eastcliffe Hall loaded a cargo of pig iron in Sorel, QC and on July 14, 1970 struck a shoal and sank near Cornwall, ON. Nine persons were lost and twelve survived.
The ship was built in 1954 by Canadian Vickers in Montreal to the maximum size of the old St.Lawrence Canals, 253.4' x 43.8' x 17.0'. When the St.Lawrence Seaway opened it was lengthed 92' and deepened 3'-9".

The grain leg is still there, housed in the tower, but has not been used in many years, since all grain ships that call here are now self-unloaders.