It was a blustery arrival for Asterix as it put into Halifax this morning for the first time. The Auxiliary Replenishment Ship is fresh from the Davie shipyard in Quebec where it was rebuilt from a commercial container ship. To be operated by Federal Fleet Services under contract to the Royal Canadian Navy, the ship is intended to provide supply services until new ships arrive sometime in the 2020s. 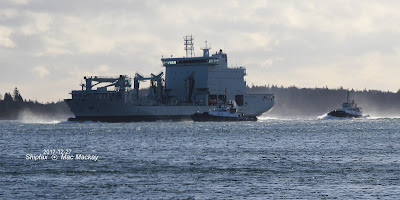 Stiff winds and freezing spray greet Asterix as it arrives in Halifax. Civilian tugs made up to the ship for berthing at pier 20.


In 2015 Davie purchased the ship and was successful in convincing two consecutive federal governments to allow the conversion to a 26,000 ton displacement multi-purpose stores / cargo ship and tanker with refueling at sea capability. It also has a hangar for two helicopters and can be fitted with armament. Most of the work was carried out at Davie's Levis, QC yard, although the superstructure was built in Finland, and installed in Levis. 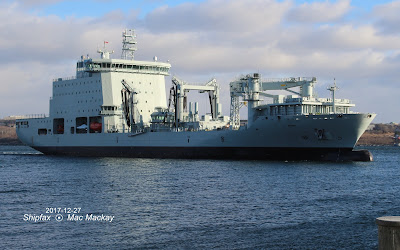 It will be operated by a joint complement of 36 civilians and up to 114 military with an additional 67 person replenishment team.


With continued delays in the navy's new replenishment ships (the former Queenston [Conservative] class, but now Protecteur [Liberal] class), Davie wants the green light to produce another conversion. Based on performance to date, this would be a very wise idea. Contracts for two ships would ensure replenishment capability on both coasts and bridge the gap which placed Canada in the awkward position of having to rely on other nations' ships for resupply. The cost of leasing the ships might also, if correctly allocated, convince the navy to get on with the job of finalizing the design of the new ships, and actually to begin construction. Supposing the ten year window is optimistic, this one ship would certainly need to go into refit at least once during that time to extend its tenure and another ship would be needed.


The second contract would mean the continued viability of the Davie yard and help to ensure that a shipbuilding industry continued to exist outside the confines of the two designated yards of Irving Shipbuilding and Seaspan. Both yards are devoted almost exclusively to the current troubled procurement program but cannot satisfy the demand for other types of ships. These include a new PEI ferry, a couple of new St.Lawrence River ferries, navy tugs, Coast Guard medium and light icebreakers and buoy tenders and even some commercial vessels.


Asterix will be unveiled to the public at pier 20, but will move at some point to HMC Dockyard when it enters service.