December 26, Boxing Day, is a holiday for most people in Halifax, and a day to clean up after Christmas. Shipping began to move again after a fierce windstorm that left many without power. Gusts up to 100 kph were recorded in some parts of western Nova Scotia and ferry services to New Brunswick and Newfoundland were disrupted again as they have been for several days. Temperatures in Halifax rocketed up to +7C Christmas Day as heavy rain accompanied the winds, and dropped again to -7C for Boxing Day.
One can only imagine conditions at sea, as several ships waited out the storm offshore or were delayed in arriving. There was of course the usual pre-Christmas rush as several ships finished up their work and got off to sea before the holiday - and the weather.

December 21
Irving Oil Woodside played host to the tanker British Sailor December 19 to 21. As usual with Irving Oil imports the ship arrived from Amsterdam via the Ijmuiden sea lock and sailed for Saint John. 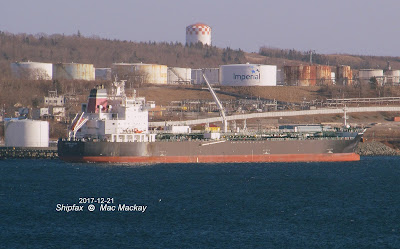 From this angle, the background is the now denuded Imperial Oil refinery site, but the ship is berthed at Irving Oil's Woodside terminal.

BP, unlike many other oil majors, still operates a fleet of tankers, but they are no longer the elegant and distinctive vessels of the 1950s and 60s. Although nominally British, (it is flagged in the Isle of Man) the ship was mass produced in 2016 by Hyundai Mipo in Ulsan, and is of the Mid-Range size of 30,948 grt, 45,999 dwt. The larger gross tonnage is apparently due to an extra accommodation deck in the superstructure. See the following

December 22
Also beating the rush was the tanker Beryl which arrived from Houston with refined product for Imperial Oil.

A more typical Mid-Range tanker, it measures 29,766 grt 49,990 dwt and was built in 2015 by SPP Shipbuilding Co of Incheon. It sailed early Christmas morning for Come-by-Chance, NL. 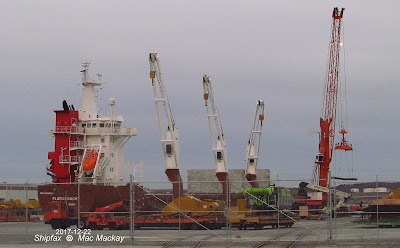 By the time I caught up with her, the green object in the foreground had been unloaded and the ship was
loading what looked like reinforcing steel, using Logistec's mobile crane. The ship's last port was Baltimore, but the cargo could have originated almost anywhere, since these ships trade world wide. 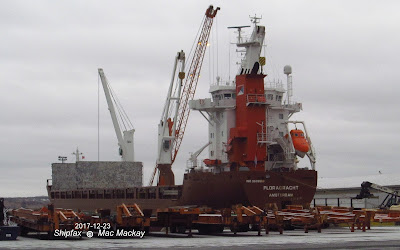 On December 23, the ship was re-stowing tween decks, using its own gear, which consists of three 80 tonne cranes.It sailed later in the day giving Aberdeen. Scotland as its destination.
The 8620 grt, 12,178 dwt ship was built in 2011 by Jiangsu Changbo Shipyard in Jingjiang China, one of six multi-purpose ships of the class in the Spliethoff fleet.

December 23
The impressive autocarrier Grande Baltimora made its second appearance in Halifax in as many months. Owned by the Grimaldi Group it was delivering cars to Autoport (likely Fiat products). Unusually however, it then moved to Fairview Cove to unload more RoRo cargo. 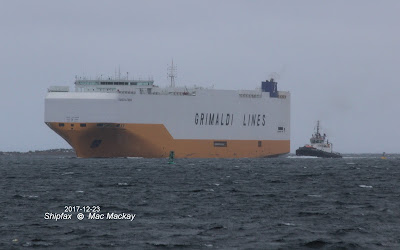 Since the Grimaldi Group also owns Atlantic Container Line, it is possible that the ship was carrying some ACL cargo. After that the ship went to anchor to wait out a big blow, and sailed early December 24.
Built by Jinling Shipyard in Nanjing, the ship was delivered in July of this year, and measures 62,134 grt, 18,447 dwt and has a capacity of 6700 autos. It also has a 150 tonne stern ramp for other RoRo cargoes. 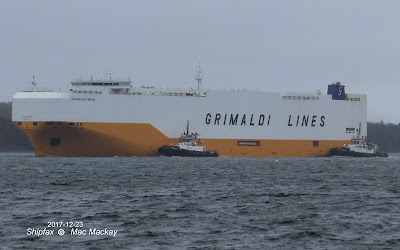 December 24
The tanker Alhena arrived from New Orleans for Imperial Oil, but did not spend long at the dock. It moved to anchor in Bedford Basin early on Christmas morning. 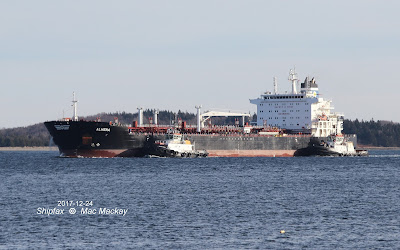 A slight variation in the usual run of handy size tankers, this one was built in 2012 by Guangzhou International in China. Tonnages of 30,240 grt, 52,420 are on the high side for Mid-Range. The Bahamas flag ship is managed by Super-Echo Tankers Management Inc for the obscurely named Nightingale Seacarriers Ltd.

Meanwhile three container ships left port, all delayed by high winds the night before. Since all three were scheduled for about the same time, I chose to go after Dalian Expres, one of the few HAPAG-Lloyd ships on the THE Alliance services, which is almost exclusively carried out in Halifax by Yang Ming and K-Line. ships. 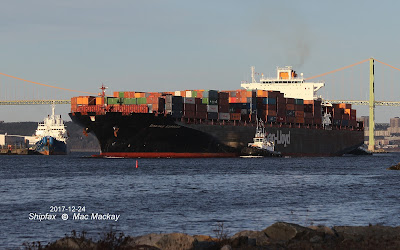 Dalian Express makes the dogleg turn in the Narrows, as the cable ship IT Intrepid lies at its winter base at Pier 9A.

December 25
After an almost springlike December 24, high winds picked up again Christmas morning, bringing rainy and squally conditions off and on. The tanker Alhena made for Bedford Basin anchorage, since its berth at Imperial Oil was exposed to the brunt of the winds. 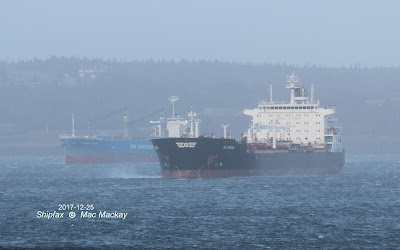 Alhena in blustery conditions with the cargo ship Thorco Logos in the background, joined Fagelgracht, another of the Spleithoff "F" class ships, that arrived the night before from Liverpool. UK. There was an afternoon sunny break but it could not cut through the salt laden spume blowing in from sea. 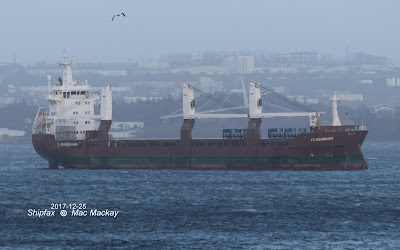 Fagelgracht has some containers on deck forward, but otherwise appears light. The ship may be the first of the winter callers for Spliethoff. The company has a regular schedule to Great Lakes ports such as Cleveland and Chicago in season, but with the St.Lawrence Seaway closing December 31, this ship would not have time to make those calls and exit before shutdown. Last winter the ships called regularly in Halifax until the Seaway re-opened in spring.

With conditions returning to fairly calm, it was a very different picture in Bedford Basin.

Thorco Logos, with its holds fitted for cable transport, has been idle in the Basin since mid- November (aside from a brief stores replenishment visit to Pier 9C December 12 to 14) . Alhena does not appear to have dragged much, and is ready to take bunkers later in the day from Algoma Dartmouth. 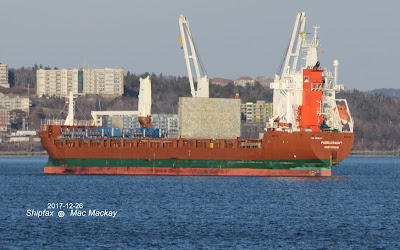 Aboard Fagelgracht a crew member attends to some maintenance. He is just visible in orange trousers and yellow coat atop the open hatch.

Among the arrivals today is the impressive research ship Fugro Discovery. It has been hired by Fisheries and Oceans for the Newfoundland Oceanography Monitoring Program normally carried out by CCGS Hudson. That ship's interrupted refit, now due for completion sometime in the spring of 2018 (a year late) has resulted in millions of dollars spent on chartered ships to do its work.
FugroDiscovery's charter alone will be in excess of $880,000 (not including taxes). 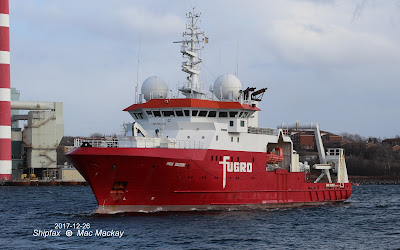 Built by the Marynaki naval shipyard in Gdynia, Poland and completed by Mykleburst MV in Gurksen, Norway in 1997, as Tromso the ship served out a ten year charter to the Norwegian Coast Guard as an offshore patrol vessel. It was armed with a 40mm/L60 Bofors cannon and carried out EEZ patrols, fisheries inspections, search and rescue missions and pollution control.
In March 2007 it ended the charter and was sold to the Dutch survey company Fugro and converted to a research vessel, flying the Panama flag. It was fitted with a 16 tonne capacity A-frame and other gear to support a ROV. It has accommodation for 24 persons. 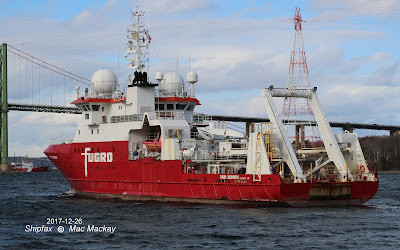 Last year the ship assisted in the unsuccessful search for Malaysian Airlines flight MH370 in the southern Indian Ocean.
This year Fugro applied for a coasting license to survey the Flemish Pass, Orphan Basin and Carson Canyon off Newfoundland for Nalcor Energy. So far I have been unable to find a record that the license was granted. The application covered the period from mid-August to December 31. 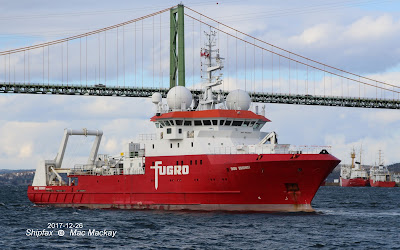 In the background the idle CCGS Hudson lies alongside the Bedford Institute, its refit not yet complete. Also alongside is the decommissioned survey vessel Matthew which has been for sale off an on for several years, without any takers. 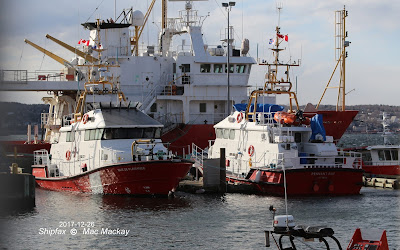 Baie de Plaisance will be stationed in Cap-aux-Meules, Magdalen Islands, replacing Cap-aux-Meules  and Pennant Bay in Sambro, NS, replacing Sambro. They are part of a large order for twenty craft replacing boats on both coasts.