The Augusta Sun arrived this afternoon for Nirint Lines and tied up at pier 31. This is the sixth name for the ship built in 2003 as Atlantic Progress. It was renamed BBC Russia the same year, then in 2008 became Federal Patriot. In 2010 it became HAL Patriot and in 2013 Atlantic Patriot.
During 2017 the ship took up a charter with Nirint Lines and called in Halifax July 7 and November 1, both times with nickel concentrates from Cuba.
Shortly after the last visit it assumed its current name. 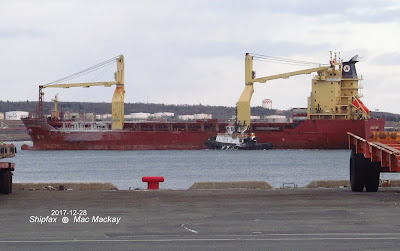 Some frozen spray forward acquired on the way to Halifax in -14C weather. 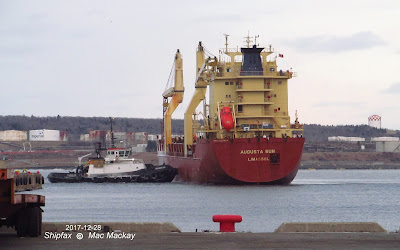 Tug Atlantic Fir has also acquired some frost while working ships in the cold weather.

Builders of the 12,993 grt, 17,471 dwt ship were New Century Shipbuilding Co of Jingjiang, China. They fitted her out with a pair of 45 tonne cranes. Although mostly a bulk and break bulk ship, it can carry 1118 TEU.

Current commercial managers MTL (Marine Transport + Logistik of Duisburg, Germany) also manage two sister ships. Augusta Unity was until last October Atlantic Pioneer. It visited Halifax ealry in 2017 in service with Atlantic RoRo Carrier.
Atlantic Power was recently photographed in Curaçao on Nirint Lines service, carrying containers. So far at least it has not been renamed.
Before the recent name change, managers were the Hartmann Group. Another Hartmann subisidiary, Intership is recorded as owner of these vessels. This explains the stylized lower case "h" on the funnels.