After nearly six months the Arctic Offshore Patrol Ship Harry DeWolf finally has a bow. Two major mega blocks for the ship were rolled out and connected at Halifax Shipyard in July. Block #1, the icebreaking bow section, remained in the assembly hall until this past week when it was rolled out to the hardstand. 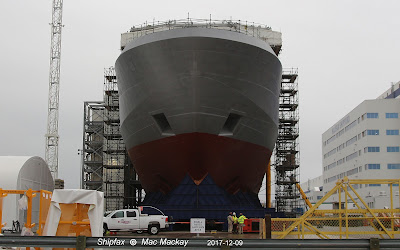 The sign says"Small Parts Laydown Area" - the ship's bow was one of three "mega blocks" which make up the ship - not exactly small parts.

This morning crews were carrying out final alignments. Using multi-wheeled motorized carriers from Fagioli Canada (partners with J.D.Irving)  the bow was sidled into place so that welding can begin. 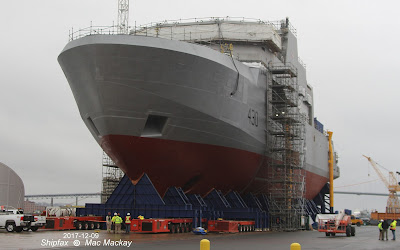 The frst two mega blocks went together in far nicer weather in July.