The (United States) National Science Foundation research vessel Endeavor returned to Halifax this afternoon after completing the first 23 day scientific charter from the Fisheries and Oceans Canada at the Bedford Institute. 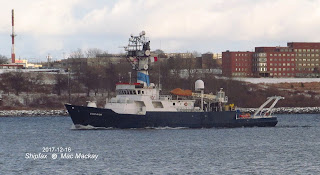 Built by Peterson Builders in Sturgeon Bay, WI in 1976, the 784 long ton displacement, 298 grt vessel is operated by the Graduate School of Oceanography of the University of Rhode Island and is based in Narragansett, RI. It had a major mid-life refit in 1993, during which the hull was lengthened from 177 ft to 185 ft loa and modified. Its single GM EMD delivers 3,050 shp to a controllable pitch prop in a steering nozzle.

According to figures published by the CBC, Fisheries and Oceans Canada (aka DFO) hired the vessel at a cost of $1,041,044 for work that CCGS Hudson was slated to do. Because Hudson's $4mn refit was still incomplete in November, the ship was yanked from the Heddle Marine in Hamilton, ON and returned to Halifax. DFO has said that the work will be finished alongside BIO by April 2018.

However the University of Rhode Island's web site reports that Endeavor has been hired again for continuation of the work for 23 days in April / May 2018 for an additional $(US)649,632. The Atlantic Zone Monitoring Program on the Scotian Slope and Gulf of Maine is a continuing process and requires fall and spring surveys.Perhaps DFO scientists do not believe their own department's press releases.

Meanwhile at the old Coast Guard base in Dartmouth Coriolis II is in winter layup after also chartering to Fisheries and Oceans for work that Hudson could not do. That expedition to the Gulf of St.Lawrence cost $721,568. 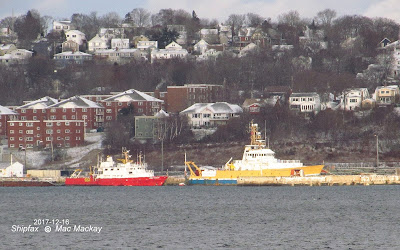 Leeway Oyssey at left and Coriolis II at right in winter layup at the old Coast Guard base.

Off Newfoundland the Fugro Discovery (Panama flag) was also hired for work that Hudson could not do at a cost of $822,000.