Another change in the Halterm crane arrangement noted today.

The crane that had remained in the down position at pier 36 and was rarely used, was raised to the up position a couple of weeks ago and has now moved over to pier 41 - dwarfed by the four Super Post -Panamax cranes. The crane has movable bogies that allow it to negotiate curved track. 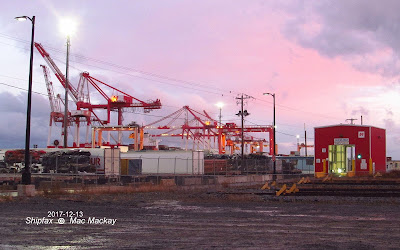 At left in this view is the oldest crane in Halterm, now moved from pier 36 to pier 41. Barely visible is the container ship Zim Monaco at pier 41-42, and not visible at all, Asian Sun arriving at pier 42 for Tropical Shipping..
The red building at the right is the Halterm truck entrance scanning shed. 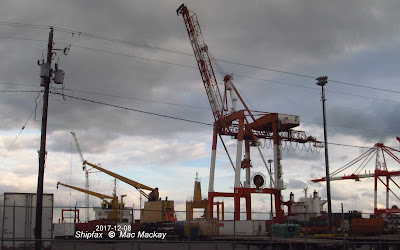 With the demolition of the three old cranes at pier 37 now largely complete, there are other changes in the works.

The map on the left shows a new area added to Halterm's laydown area.
The map on the right,  printed before the recent crane demolition, did not list all the cranes in Halterm (it was one short). The tally now is four Super Post Panamax and the one from pier 36 which is pre-Panamax by the look of it.

The rumour persists that the Port Authority will fill in the camber between Piers A-1 and B to gain more ground area. I don't see this as a viable long term proposition since it will not gain the facility any berth space, That could only be achieved by extending Pier C (again).
It would lose the use of berths (piers) 36 and 37.  Granted berths 33 and 34 are rarely used by the port, (the bunkering tanker Algoma Dartmouth uses berth 34, but it could go elsewhere) but again that would be expensive laydown area without the ability to work more ships.

However if my proposal to move the Oceanex and St-Pierre traffic to Fairview were to be accepted, then perhaps there would be no need for berths 36 and 37.