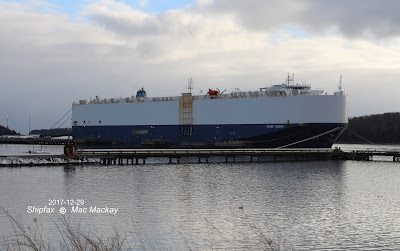 In the serene surroundings of Eastern Passage, Viking Queen (and its crew) are taking a well earned break from the high seas.

It must have been a relief to the crew when Viking Queen finally tied up at Autoport this morning. The ship had been holding off Halifax since about December 23 in some of the worst weather we have seen this year. Its wanderings took it as far south as Liverpool, NS - but well out to sea. It must have steamed hundreds of miles in the four or five days it was offshore..Once the port re-opened after the Christmas Day shut down, it had to wait its turn after Otello which unloaded at both Pier 31 and Autoport. 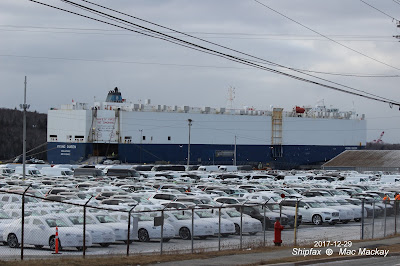 Viking Queen is making a small contribution to the thousands of new cars in Autoport.

It is a wonder there wasn't some damage to its precious cargo, but from what I could see today, it safely delivered a number of BMWs loaded in its last port, Emden, December 13.

The ship's owners, Gram Car Carriers, lists the ship's next port as Houston, with an ETA of December 29.  That schedule has obviously been thrown into disarray - it will be a week late at least.