Unless something extraordinarily exciting happens in Halifax harbour, Shipfax will be taking a Christmas break for a few days.
In the meantime, best wishes for a Merry Christmas and Happy New Year. 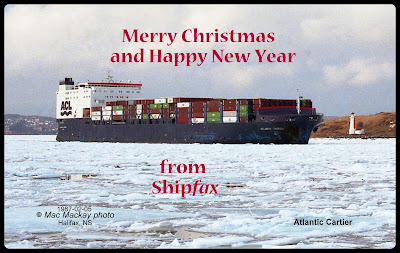 Atlantic Cartier, built in 1985 and lengthened in 1987, traded for Atlantic Container Line (under various ownerships) for its entire service life. Its first call in Halifax was May 29, 1985 and its last was June 30 to July 1, 2017. Aside from refits (and a fire and a few other incidents) it maintained a monthly rotation through Halifax for all those years.It is unlikely that its record of service (and that of its four sister ships, particulary Atlantic Conveyor which served a few month longer) will ever be broken.
It arrived in Alang India in August and was beached for scrapping September 22.

A word of explanation:
Halifax is noted as an ice free harbour.  This means that it does not freeze over. Although ice can form in the Northwest Arm and in some coves and backwaters, the main harbour does not freeze. The reason is that air temperatures rarely remain cold enough for long enough (see my Tugfax Christmas Greeting for a very, very cold day). In 1962 after a prolonged cold spell slush ice made going  difficult for the pilot boat, but only inconvenienced shipping for a brief time.

Sometimes however broken ice drifts into Halifax harbour. The ice originates in the Gulf of St.Lawrence and is carried by winds and tides and is drawn along the coast and into the harbour. It can quite quickly be drawn out again by the same forces. It is a very rare event however that sufficient ice comes in to effect shipping.

In fact it has only happened twice in the last 100 years. March of 1948 was quite severe, when Gulf  ice was the heaviest in 22 years and a 100 mile wide band of ice extended well past Halifax.
The photo above shows the second time when the harbour was clogged with ice for several days, cleared, then returned for a few days.

Icebreakers were called in, not to break ice, but to move it aside to clear paths for ships. Atlantic Cartier was one of several ships that coped quite well with the novel experience.