Ships of the Dutch heavy lift specialists Biglift and members of parent company Spliethoffs are becoming regular visitors to Halifax.

Today it was a return visit for the Happy Sky, this time berthing at Fairvew Cove. The ship was last here in August 2016 when it delivered the superstructures for the two supply ships Atlantic Griffon and Atlantic Shrike form the Damen shipyard in Galati, Romania. 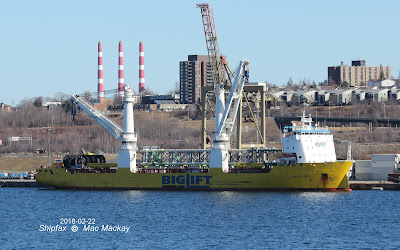 This time the cargo was less visible, and may have been some small packages, possibly containers. Whatever it was it did not need the full capacity of the impressive 900 tonne deck cranes. These cranes can work in tandem for super heavy loads, and were used to load the 620 tonne supply ship superstructures and to place then accurately on the ship's hulls.

Happy Sky was built in 2013 at the Larsen + Toubro shipyard in Surat, India. Despite its relatively modest tonnage of 15,989 grt, 18,680 dwt, its large deck space allows it to carry some impressive loads. The ship had some large steel fabrications on deck, but they are not for Halifax. They are more likely related to oil production, and may be destined for the ship's next port of Houston, TX.

In the background CSL Tacoma loadig gypsum for Baltimore.

While Happy Sky was alongside waiting to unload, ACL's Atlantic Star made its arrival.  I was surprised to see how much the ship heeled as it made the turn from the Narrows. These fourth generation ConRo ships  are always an impressive sight.

There was one unusual sight, although not exactly in the harbour. A fishing boat was in transit on a trailer truck bound for the Halterm container terminal. It had to make a turn in the Point Pleasant Park lower parking lot in order to negotiate its way. 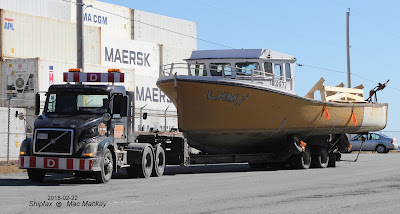 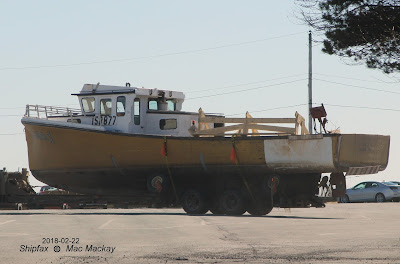 Although the name is painted on as LHM 1, it is registered as L.H.M. I in Caraquet, NB. It was built of wood in 1999 by Gerald Dugay in Cap Pelé, NB. The last reported owners in Lameque Island, NB. It is likely on its way to other waters however, possibly Newfoundland or St-Pierre et Miquelon.