CSL Argosy arrived for bunkers today, making it the fourth CSL ship in Halifax in a week.
The first ship was CSL Tacoma, arriving February 3 to load gypsum. It did not sail until February 5, opting to stay in port as a storm passed. Next was CSL Acadian arriving February 5 at Pier 9C taking on parts and stores and sailing later in the day without taking any cargo.

Salarium, from CSL's domestic fleet, arrived February 9 and took a part cargo of gypsum to Bayside, NB for the CertainTeed Gypsum Canada Inc plant in MacAdam, NB. Salarium (the former Nanticoke) is on long term charter to carry salt from the Magdalen Islands but finds other work from time to time.

CSL Argosy is another of the former tankers that CSL acquired as single hulls were being phased out. Built by Sumitomo Heavy Industries in Oppama, Japan in 1981 it was a 41,471 grt, 65,755 dwt vessel named Ogden Nile. It was renamed Nile in 1984, and Niles in 2004.
In 2006, CSL sent the ship to Chengxi Shipyard in China where a new forebody was built, complete with extensive self-unloading equipment.  That was mated to the stern section, containing the accommodations and the original reliable Sulzer main engine. The new ship, renamed CSL Argosy now measures 46,409 grt, 74,423 dwt.

Drawing 12.7m, CSL Argosy anchored in number one anchorage south of George's Island for its short stay in port.

It is a rare caller in Halifax since it is too large to load gypsum here, and on the occasions it has been here it took on stores or bunkers. It sailed this evening for Belledune, NB with a cargo of coal from Puerto Bolivar, Colombia.. 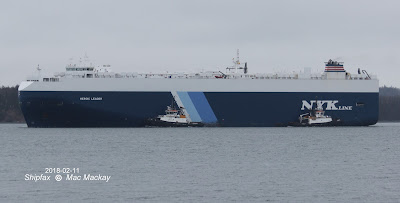 Most car carriers look about the same size until they are nearly broadside. Then their length becomes apparent. This one is about 6 or 7 tugs long!

The merger of the major Japanese container lines (NYK, MOL and K-Line) will only effect their container fleets, so we can still expect to see NYK autocarriers. NYK claims to have the world's largest fleet of such ships, numbering in excess of 111 with a capacity of 600,000 units and carries 3.4 mn cars per year. At 7,500 cars Heroic Leader is a member of the largest class of ships in their fleet. It is also capable of carrying machinery, equipment and specialized cargo using a 200 tonne stern ramp and adjustable decks.


Also in port is the tanker Enegy Puma at Irving Oil.The 29,605 grt, 46,549 dwt tanker dates from 2008 when it was built by Sungdong Shipbilding + Marine Engineering in Tongyeong, South Korea. 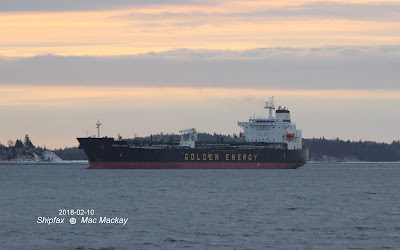 Most foreign flag tankers calling at Irving's Woodside terminal arrive from the Netherlands and head for Saint John after unloading. This one arrived from Saint John, apparently with a partial cargo. Its last visit in Halifax was June 13, 2013.