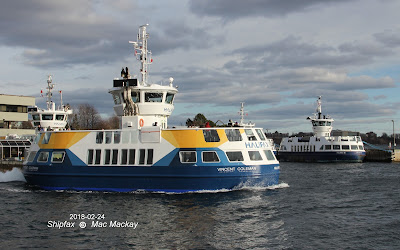 It is the final penultimate delivery in a fleet replacement program that has rejuvenated what was a three boat flotilla to a five ship armada. It is expected that the oldest member of the fleet, Halifax III will be retired, and Woodside I will become a back-up until delivery of the Rita Joe later this year . That will leave four boats to carry out the daily schedule.
That schedule was expanded while work on re-decking the Angus L. Macdonald bridge restricted car pedestrian and bicycle traffic. However with the bridge now open to all traffic, Metro Transit has opted to run an expanded the schedule anyway - ridership must still be up!
As of February 20 there will be weekday 15 minute service from 0700 to 2000 and 30 minute service from 2000 to 2330 hrs 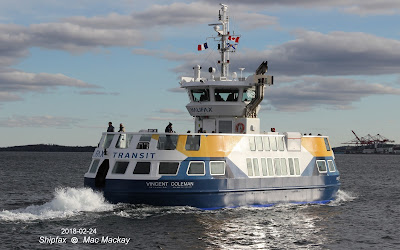 Heading for Halifax the boat sets up its customary "rooster tail".

The names for the boats, Craig Blake, Christopher Stannix, Viola Desmond and Vincent Coleman were selected from public suggestions and avoided the unimaginative addition of roman numerals to previous names.

Former fleet member Dartmouth III is now in Toronto, having made the long trip hopping, skipping and jumping between ports along the way. It is awaiting spring to enter service to Toronto Island, under a new name - yet to be announced.