Holiday Monday - for some

Most Nova Scotians enjoyed a day off as Heritage Day, but there was some work in the harbour.

Asian Moon arrived for Nirint Lines, with another cargo of nickel from Cuba.

As Asian Moon passes the Middle Ground inbound, the tug Atlantic Willow takes up a stern first orientation near the ship's stern. This will allow it to pull the ship round then push it stern first into pier 31.

The ship tied up at pier 31, but work to unload will likely not start until tomorrow. Built in 2006 by Jiangdong Shipyard as Aliança Inca it took its current name the same year. It is a 9956 grt, 13,670 dwt vessel with a container capacity of 1118 TEU and has two 45 tonne cargo cranes.

Only one other container ship was in port today. YM Evolution arrived and sailed on THE Alliance's AL1 service (North Europe / East Coast North America). The 4662 TEU ship dates from 2014 when it was delivered by the China Shipbuilding Corp in Kaohsiung, Taiwan. It measures 47,952 grt, 57,320 dwt and is one of four sisters of the "E" class on the AL1 rotation. 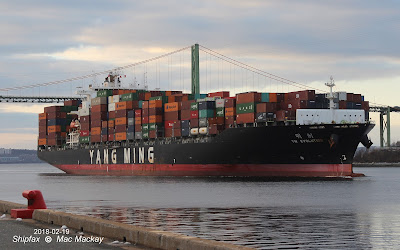 YM Evolution outbound in the Narrows on the eastbound leg of its trip. Bound for Bremerhaven, the ship is carrying lots of containers, but is high in the water, signifying a lot of empties.


With today's fine sea conditions, it was a good day for CCGC Baie de Plaisance to do some more trials work. (It was out in Bedford Basin on Saturday too.) 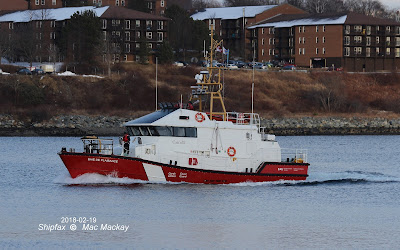 The first of twelve new rescue cutters to be delivered to the CCG, it arrived in Halifax from builders Chantier Naval Forillon Inc in Gaspé in November. It will take up station at Cap-aux-Meules, Magdalen Islands as soon as ice conditions permit it to make the trip.