It was a sunny today today for a change, so some brighter photos than those posted recently. The comings and goings today were all familiar faces going about their regular business.

APL Santiago arrived on the Columbus JAX service operated by parent CMA CGM . One of 17 ships on the service, that call in 17 ports from Oakland and Los Angeles through Asia to the east coast of North America and back again. All the ships currently on the service are in the 8500 to 9500 TEU size, but rumours have it that next month APL Salalah, a 10,642 TEU ship will join the loop. If so it will inch up the size for largest container ship to call in Halifax. It is no surprise that larger ships are coming, since the Columbus JAX ships always look fully loaded. Halifax is their first stop after the 20 day transit from Colombo, Sri Lanka (30 days out of Hong Kong).. 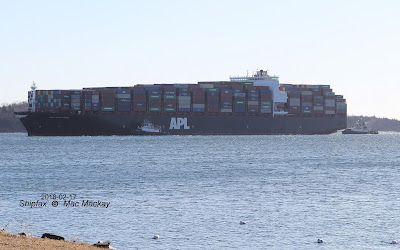 APL Santiago used three tugs to berth at Halterm. Atlantic Oak was stern tethered escort, Atlantic Fir took the bow and Atlantic Willow was working the starboard side (out of sight in the photo) to assist in the turn.

Arriving early this morning and sailing from Halterm in the early afternoon, the veteran Maersk Patras was on schedule for its regular return across the Atlantic from Montreal.

The former P+O Nedlloyd Marseille, renamed in 2006, was acquired by Maersk when they took over PONL. Again with rumours it is said that the 1998 built sisters on the route will be replaced come spring.

Fairview Cove had Berlin Bridge today on the AL6 service operated for THE Alliance. Although wearing K-Line colours, it is in fact owned by Seaspan International, part of the Washington Group, on long term charter.

Berlin Bridge made a rare passage west of George's Island outbound. There did not seem to be any particular reason for this, as the east channel was open. However there is deeper water west of the island. 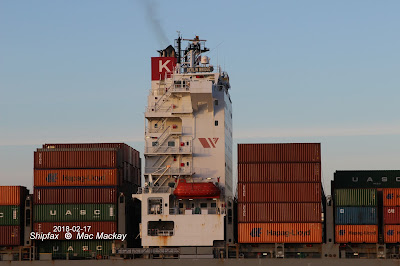 The stylized "W" below the bridge wing is the Washington Group logo.

The AL6 ships appear to be carrying more cargo these days than when the service started last year, and this will be good news at Fairview Cove, now that the service is assured for another year at least. [see previous post below]

At Pier 9C work continues on the annual refit of Fundy Rose. Canadian Maritime Engineering Ltd seems to be working seven days a week on the inside and outside of the ship. 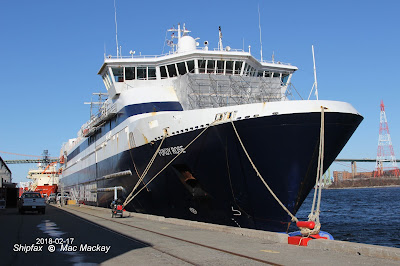 Rubbing stakes have been extended on the starboard side below the bridge.
That is Atlantic Condor in the background at its usual berth between frequent trips to the Deep Panuke gas field for Encana.