Power to the people (of St-Pierre)

Regular weekly service between Halifax and the French islands of St-Pierre et Miquelon was disrupted this week when the shuttle ship Nolhanava suffered a mechanical breakdown and could not make its usual trip, which leaves Halifax every Friday. 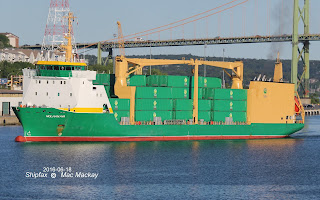 Fortunately the Atlantic Power was in Halifax and could fit in a "one off" trip to St-Pierre. Atlantic Power is on charter to Nirint Shipping of the Netherlands and runs from The Netherlands and Spain to Cuba. Its return trip calls in Halifax with nickel sulfides and other cargo. Once it completed working at pier 31 on Wednesday, it moved over to pier 41 and loaded some containers and sailed for Bilbao, Spain - via St-Pierre. However as a general cargo / container vessel it is not suited to RoRo cargo, so whatever RoRo cargo was on board Nolhanava will have to wait.

Nolhanava arrived Tuesday January 30 and tied up at pier 9C - not its usual berth- to carry out repairs and wait out a storm. It was scheduled to move to pier 36 /Halterm a couple of times, but remained at 9C until Monday February 5 before moving to pier 36. Even then it was not ready to sail, and so other arrangements were made. The report I received says that it has a pump failure and is awaiting parts from Germany.

Oddly this is Atlantic Power's first trip to Halifax, after joining Nirint Lines in 2017 and it is not scheduled to return according to published schedules.  It is a 12,993 grt general cargo ship with two 45 tonne cranes and a container capacity of 1118 TEU. A multi-purpose ship it often carries a variety of cargoes including bulk and breakbulk. It was built in 2000 by Jingjiang Shipyard in China and has previously carried the names Onego Power, Federal Power and Seaboard Power.