It's been a difficult winter for the Canadian Coast Guard's icebreaker fleet. Various mechanical issues have kept some of the ships out of service for days at a time. This has been particularly awkward as it has been a winter for heavy ice on the upper reaches of the St.Lawrence.
In mid-January CCGS Terry Fox was sidelined, just when one of the Quebec ferries was beset by ice. This week it is CCGS Amundsen with problems. On February 10 it had a crankcase explosion off Gros Cap-à-l.Aigle (near St-Siméon) a few miles from my summer roost. It was still able to operate with five of its six engines, but has now tied up at Gros Cacouna. 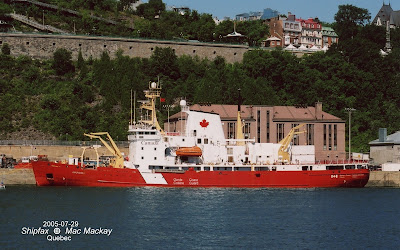 CCGS Amundsen at the Quebec City Coast Guard agency, below the Citadel ramparts.

Of course this prompted calls for an immediate solution to a problem that has been brewing for years. As Canada's icebreaker fleet continues to age with no action on replacements (but many costly refits and life extensions).  The government has been fixated on replacing other ships for the navy and seemingly has no time to deal with icebreakers.

Offers of foreign ships, which would also require costly upgrades, are still being considered, but they would not be available this year in any event.  So far shipping has not been delayed for extended periods, but patience is wearing thin in some circles.

Amundsen has been in Halifax many times over the years for annual refits (when Halifax Shipyard was still in the ship repair business). It was built in 1978-79 by Burrard Dry Dock Co Ltd in North Vancouver as Franklin. Renamed Sir John Franklin in 1981 it was based in St. John's, NL until laid up in 1995. It was re-activated and then transferred to Quebec for the winter of 1997-98, then placed in reserve in 2000..
In 2002-2003 it was converted to an arctic research vessel, but to help out with icebreaking in the winter and renamed Amundsen.

In 2007-2008 it was intentionally "frozen in" in the Beaufort Sea to conduct research.
In 2011 it was removed from service while four of its six main engines were replaced and did not return to service until 2013. Several times over the past few years its research programs have been curtailed or  scrubbed completely due to various ice conditions in the Strait of Belle Isle and Hudson Bay, where its services as an icebreaker were needed.

According to the CCG"s maintenance calender Amundsen was to have a lengthy drydocking and refit just last summer. However with ships of this vintage more such problems can be expected. Sister ship Des Groseilliers, Pierre Radisson and Henry Larsen have also had their own mechanical issues and have undergone extensive refits in recent years or have ones planned in the next year or two.