A ship that had been serving Halifax for the Icelandic company Eimskip since 2005 has been replaced. Reykjafoss has been renamed RS Mistral and is currently operating between Lisbon and Caniçal Madeira, Portugal.
The was the fourth ship to carry the name for Eimskip. Built in 1999 by Cassens, Emden, it measures 7541 grt, 8430 dwt and has a capacity of 712 TEU (including 100 reefers) and has two 40 tonne cargo handling cranes. It is owned by MS Westersingel of Haren Ems, and managed by Reider Shipping, Winschoten, Netherlands. It has carried several names over the years. 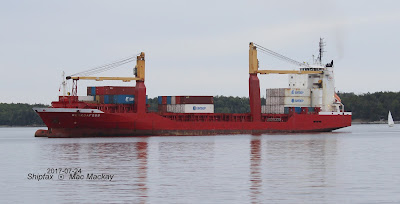 Earlier this year Eimskip announced that it was increasing the frequency of its "Green Line" sailings to provide a weekly service between Iceland, Argentia, NL, Halifax and Portland, ME. This would also serve as a New England feeder service for CMA CGM, They added the ship Selfoss joining Reykjafoss and Skogafoss.

Last month Pantonio replaced Skogafoss.
Pantonio is a similar sized vessel of 7545 grt, 8153 dwt, but is a newer gearless container ship built in 2007 by Sainty Shipbuilding (Yangzhou) Ltd. It has a container capacity of 698 TEU, but an increase in reefers to 120.
If Pantonio is a long term member of the fleet, it seems likely that at some point it will be renamed "Reykjafoss". 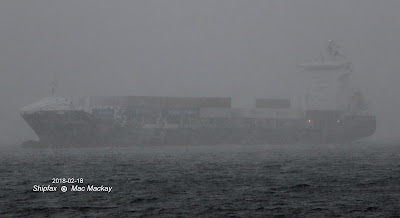 This morning's arrival was less than conducive to photography, but does give an idea of the ship's general shape. It seems to have picked up quite a bit of frozen spray en route from Argentia.

There have been many references to the ships named Reykjafoss on Shipfax:
http://shipfax.blogspot.ca/search?q=reykjafoss